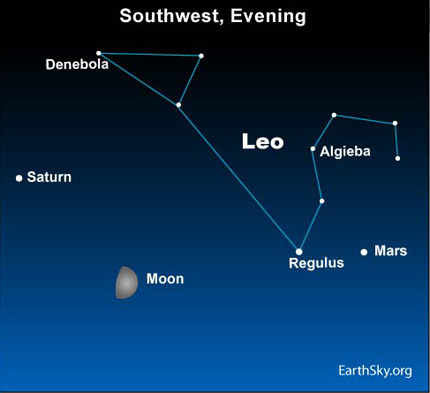 [3]Tonight’s waxing gibbous moon [4] points out a colorful lineup of celestial lights. The planet Saturn shines to the left (or east) of the moon, whereas the star Regulus and the red planet Mars shine to the moon’s right (or west). These heavenly bodies exhibit distinctive colors, but you may need binoculars to discern them.

Saturn, the 6th planet outward from the sun, appears yellow or golden through binoculars. What’s more, a small backyard telescope shows you Saturn’s glorious rings. At present, we’re seeing the rings almost edge-on, with the north side of Saturn’s rings tilting less than 2 degrees our way. However, the rings will open up wider as the year progresses. By the end of 2010, the rings will tilt some 10 degrees toward Earth.

Now look at Regulus [5], the brightest star in the constellation leo the Lion. Although color perception can vary somewhat from person to person, this star more or less appears white – or white tinged with blue. Regulus is a star, so it’s more apt to twinkle than the planets. Planets tend to shine with a steadier light.

Now aim your binoculars at ruddy-colored Mars, to see why the 4th planet from the sun is named after the god of war.