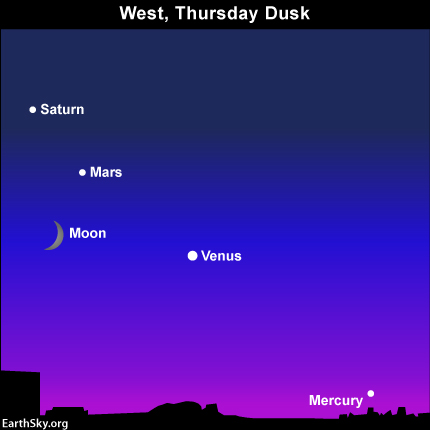 [3]Have you been watching the string of planets adorning the July evening sky after sunset [4]? If so, you might have noticed that the order of the planets from up to down – Saturn, Mars, Venus and Mercury – has remained steady throughout the month. However, the moon’s position relative to the planetary line-up has been changing, with the moon now climbing this stairway of planets day by day by day by day!

Yesterday evening, the moon was close to Venus. This evening, the moon has moved noticeably toward Mars. In the Americas, the moon and Mars shine fairly close together. In eastern Asia, the moon is roughly midway between Mars and Venus. In Australia and New Zealand, the moon sits somewhat closer to Venus.

No matter where you live, however, the moon always moves eastward relative to the planets. The moon first passed Mercury several days ago, then Venus yesterday and now Mars. Tomorrow the moon will swing by Saturn.

As always, Mercury will be hard to see because it stays so close to the sun’s glare and sets soon after sunset.