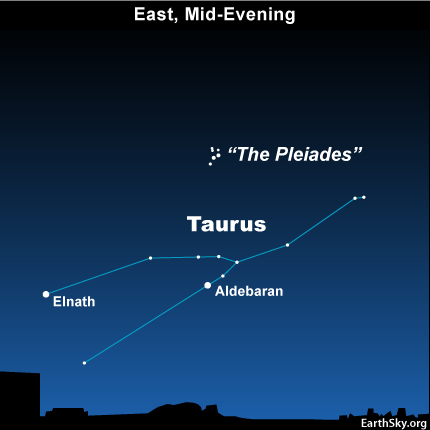 [3]You’re likely to see the most North Taurid meteors in the wee hours – just after midnight. This shower is going on now and might continue through the weekend. The North Taurids are generally a very modest shower, offering perhaps 10 meteors per hour. However, even one bright meteor can be a treat.

Still, you might want to see the Bull – the radiant point for the North Taurid meteors. Taurus contains many noticeable stars – plus two star clusters – and is pretty easy to spot. The starlit Bull appears over the eastern horizon by around 8 p.m. tonight. The Bull’s face consists of a star cluster called the Hyades [4]. Aldebaran [5] – the Bull’s fiery red eye – is part of the Hyades. Elnath [6] marks the tip of one horn of the Bull and the Pleiades [7] star cluster marks the Bull’s shoulder.

The Bull climbs upward throughout the evening hours, to soar to his highest point for the night around 1 a.m. That is why the meteors are best around then. Meteor showers are often best when their radiant point is highest in the sky.

Taurus descends westward throughout the morning hours, and is found over the western horizon by daybreak. Unlike some meteor showers, the North Taurids don’t exhibit a sharp peak; so comparable meteor rates – about 10 an hour – might be in store for the weekend.