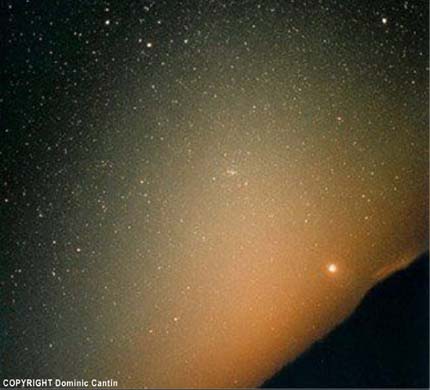 [3]Autumn is the best time of year to see the false dawn, also known as the zodiacal light [4].

This light can be noticeable and easy to see from latitudes like those in the southern U.S. I’ve seen it many times from the latitude of southern Texas, sometimes while driving a lonely highway far from city lights, in the hour or so before true dawn begins to light the sky. In that case, the zodiacal light can resemble the lights of a city or town just over the horizon. Meanwhile, skywatchers in the northern U.S. or Canada sometimes say, wistfully, that they have never seen it.

You need a dark sky location to see the zodiacal light, somewhere where city lights are not obscuring the natural lights in the sky. The zodiacal light is a pyramid-shaped glow in the east before dawn. It is even “milkier” in appearance than the starlit trail of the summer Milky Way. It is most visible before dawn at this time of year because (as seen from the northern hemisphere) the ecliptic – or path of the sun, moon and planets – stands nearly straight up with respect to the eastern horizon before dawn now.