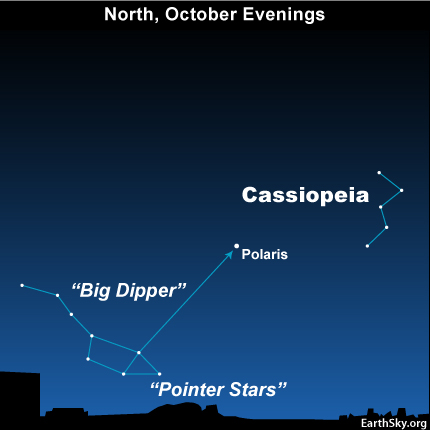 [3]On October evenings, the Big Dipper resides rather low in the northwest sky, and the W or M-shape constellation Cassiopeia the Queen sits on her throne in the upper northeast sky. These two star formations are like riders on opposite side of a Ferris Wheel. They spin around Polaris, the North Star, once a day. As one rises upward, the other plunges downward – and vice versa.

If you live north of 41 degrees north latitude – the latitude of New York City – the Big Dipper and Cassiopeia are both circumpolar. Circumpolar refers to stars that are always above the horizon (if it’s level) at any time of night all year round. Watch as Cassiopeia rises up and the Big Dipper falls down on these cool autumn evenings.