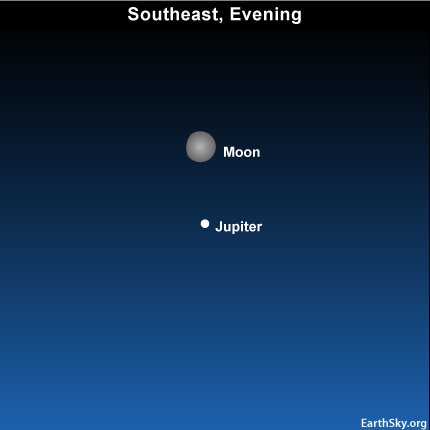 [3]As seen from North America, the waxing gibbous moon [4] and the blazing planet Jupiter are the closest together for the month tonight. From Asia, they will be closest tomorrow night. Nevertheless, no matter where you live worldwide, look for Jupiter near tonight’s moon.

With the exception of the moon, Jupiter is the brightest heavenly object in tonight’s evening sky. Jupiter and the moon move westward on the sky’s dome throughout most of the night tonight, and they will set beneath your western horizon in the wee hours before dawn.

As seen from Earth, the moon looks much larger than Jupiter. However, that is because the moon is so much closer to us. This evening, the moon is about 1.35 light-seconds from Earth, while Jupiter is nearly 34 light-minutes away. Jupiter lies over 1,500 times farther off than the moon.

Jupiter’s diameter is about 40 times greater than the moon’s diameter. To gauge the size of our moon relative to Jupiter, look at Jupiter though a backyard telescope sometime. Jupiter’s four major moons – called the Galilean moons – are pretty easy to see. You might miss a moon or two on occasion, because these moons routinely swing in front and behind Jupiter.

In their outward order from Jupiter, these moons are Io, Europa, Ganymede and Callisto. Io and Europa are about the same size as our moon, whereas Ganymede and Callisto have diameters of about 1.5 times that of our moon. That bright “star” by the moon tonight is actually the dazzling planet Jupiter!