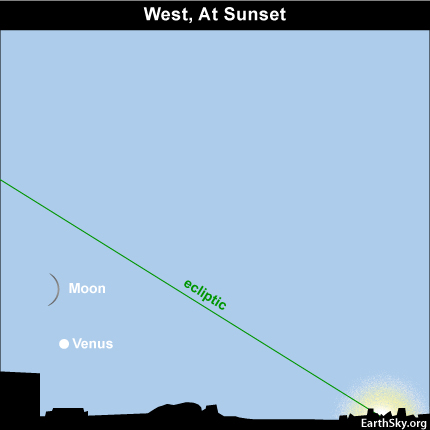 [3]Tonight presents the final pairing of the moon and the planet Venus in the evening sky until the autumn of 2011. Or, if you live in the southern hemisphere, it is the last evening pairing until the spring of 2011. Unfortunately, for much of the northern hemisphere, a “perfect” storm of events makes the sighting of the waxing crescent moon [4] and dazzling Venus difficult – if not downright impossible – to observe.

However, that’s not all. The moon and Venus lie south of the ecliptic [6], and that causes the moon and Venus to set all that much sooner after the sun. Talk about a double whammy! At latitudes close to 40 degrees north – like Boulder, Colorado – Venus sets about one-half hour after the sun and the moon sets about one hour after that. You will need a level horizon, clear sky and binoculars to see these two worlds in the glow of twilight.

Where is the ecliptic in relation to the Milky Way? [6]