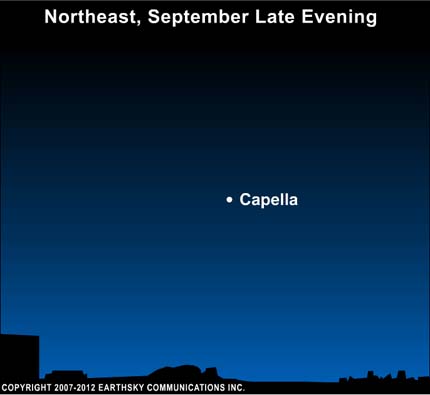 [3]Every year in late September and early October, we get questions from people who see a bright star twinkling with red and green flashes, low in the northeastern sky. Capella [4] is a golden star when seen higher up in the sky. If you could travel to it in space, you’d find that it’s actually two golden stars, both with roughly the same surface temperature as our local star, the sun . . . but both larger and brighter than the sun.  In late September 2010, time to search for Comet Hartley 2 with binoculars [5]

So here is a golden star that flashes red and green when it is low in the sky. Why does it do that? The reality is that every star in the sky undergoes the same process as Capella, to produce its colorful twinkling. That is, every star’s light must shine through Earth’s atmosphere before reaching our eyes. The key is that, when you look at an object low in the sky, you are looking through more atmosphere than when the same object is overhead. The atmosphere splits or “refracts” the star’s light, just as a prism splits sunlight.

That is where Capella’s red and green flashes are coming from … not from the star itself … but from the refraction of its light by our atmosphere. When you see Capella higher in the sky, these glints of red and green will disappear.

By the way, why are these flashes of color so noticeable with Capella? The reason is simply that it is a bright star. It is the 6th brightest star in Earth’s sky, not including our sun. Capella is in the constellation Auriga the Charioteer, but since antiquity it has carried the name “Goat Star.”

Can you find the Big Dipper [6] on these autumn nights? The top two bowl stars – Megrez and Dubhe – more or less point toward Capella. It is a long hop to Capella, though. Remember to extend the Megrez/Dubhe line away from the Big Dipper handle.

Do not mistake the much brighter planet Jupiter for Capella. You will see Jupiter blazing away in the east at dusk and nightfall, but you will have to wait until mid-evening or so to see Capella over your northeast horizon. It is found way to the north (or left) of Jupiter. Whereas Jupiter shines with the brighter and steadier light, Capella sparkles fiercely, flashing with the colors of the rainbow.