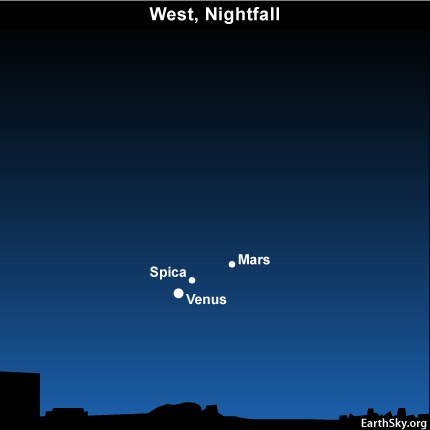 [3]The first few evenings of September 2010 present a celestial trio – the planets Venus and Mars, and the star Spica fitting within a circle that is smaller than 5 degrees in diameter. Because a typical binocular field spans about 5 degrees of sky, there is a good chance of seeing all three luminaries squeezing up together inside a single binocular field.

Venus is by far the brightest light of the trio. Although Spica ranks as a first-magnitude star, it pales next to the sky’s brightest planet. In addition, sparkling blue-white Spica outshines the red planet Mars.

Watch this celestial trio over the next several evenings, as these two worlds dance around the star Spica. This evening, Venus couples up with Spica. On September 5, look for Spica to pair up with Mars.

Catch the celestial trio about one hour after sunset. Look for Venus first, then for Spica and Mars.