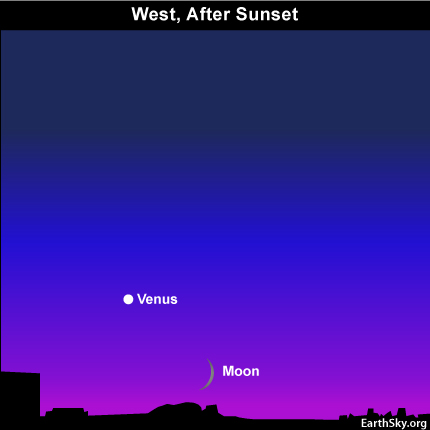 [3]The waxing crescent moon and the blazing planet Venus shine low in the west at dusk. Our chart shows the sky scene for about 45 minutes after sundown, with the moon barely above the horizon. If you miss the moon with Venus this evening, try again tomorrow [4]. On Saturday, the lunar crescent will appear higher in the sky and will set later after sunset [5].

Whenever the moon appears in the west at dusk and early evening, it is always a waxing crescent moon [6]. In contrast, Venus always exhibits a waning phase whenever it pops out after the sun goes down. At present, Venus shines as a waning crescent. Waning means the illuminated portion is getting thinner by the day. Crescent means Venus’ disk is less than 50% covered over in sunshine.

You need a telescope to observe Venus’ phases. Its disk is now 35% illuminated in sunshine. By the end of September, the illuminated portion will shrink to 20%. By the start of the last week in October, it will only be 1% illuminated. Twilight presents the best time to observe the crescent – before the glare of Venus becomes too overpowering.

Bright star in east? Might be planet Jupiter, nearly at its closest since 1951. [7]

Venus is the most fun to watch when it is a thin crescent, because that is when this world comes closest to Earth and looms largest in the telescope. At our mid-northern latitudes, though, Venus sits low in the evening twilight, so we have to catch this luminary soon after sunset [5]. Southern hemisphere observers see the crescent Venus much higher up at dusk throughout September and October.

These next two weeks, watch the moon wax and Venus wane in the September evening sky.