[3]A spacecraft is now in route to the dwarf planet Pluto, scheduled to arrive in the year 2015. Tonight’s moon can help you visualize this Pluto spacecraft’s whereabouts on our sky’s dome.

We are talking about the New Horizons spacecraft, launched from Earth in 2006. Will you see the spacecraft itself tonight? No. Even with a high-powered telescope, this little craft cannot be seen from Earth now as it speeds toward the outer solar system. You would have a better chance of spotting Pluto (which can’t be seen from Earth with the eye alone). Pluto is some 1,500 times fainter than the faintest star visible to the unaided eye, but Pluto outshines the New Horizons spacecraft by some 10 billion times.

So, what are we suggesting here? Nothing more than stretching your imagination to visualize a spacecraft speeding along in outer space. Tonight’s waxing gibbous moon [4] and the New Horizons spacecraft occupy nearly the same spot on the sky’s dome. Of course, the two are not close together in space. The moon lies about 225,000 miles from Earth tonight, while the New Horizon spacecraft lies over 6,600 times farther away.

First, look at our chart. See the empty spot next to the words New Horizon? That spot marks the site of the spacecraft on tonight’s sky dome. If you look at tonight’s moon, you will be looking in the right direction. We have also drawn in the Teapot star formation in the western half of the constellation Sagittarius to help you find the point of the spacecraft’s location in our sky. These stars in Sagittarius might or might not be visible in the moonlit glare tonight, but they are helpful, if you like Pluto, or New Horizons. The New Horizons spacecraft and Pluto will remain in front of Sagittarius until New Horizons finally meets up with Pluto in July 2015. If you can spot these stars, you can gaze at them for several years while contemplating New Horizons’ long journey. 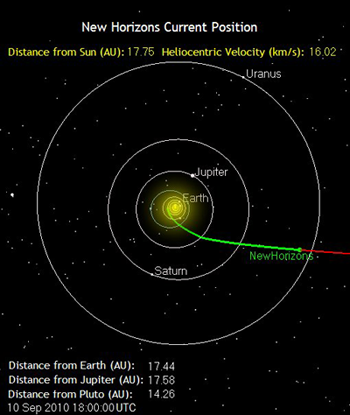 Where is New Horizons now in space? The image at right shows the craft’s whereabouts from another perspective – looking down on the solar system – as it was on September 10, 2010. For new chart, showing New Horizons’ place in space tonight, click here [7].

Now flip your perspective again, and go back to the chart at the top of this page. It is tough to flip perspectives like this. Nevertheless, it is fun to try.

Most important of all, go outside tonight to gaze toward the moon – and let the moon guide you to the New Horizons’ place in the starry sky.