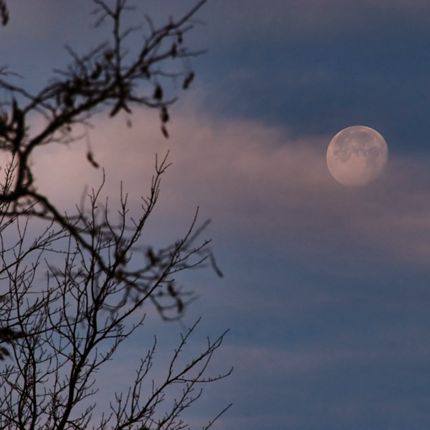 [2]Sylvia wrote, “When is the best time to see the moon in the sky during daylight hours?”

[3]Sylvia, it is easier to see a daytime moon when the moon is fairly far from the sun in the sky. When would that be? It would be around the time of full moon [4] each month. A full moon is always 180 degrees from the sun, on the opposite side of the sky’s dome. Full moon was September 23.

Generally, the full moon sets around sunrise. However, the waning gibbous moon [5] sets in the west after sunrise. In the next few mornings, after sunrise, look for the waning gibbous moon to sail over your western horizon during the morning hours. At mid-northern latitudes in North America, the moon will set at roughly 10:00 a.m. tomorrow, 11:00 a.m. on Monday and noon Tuesday. The precise time for moonset in your sky can be found in an astronomical almanac [6].

By the way, the moon is up during the day half the time. It has to be, since it orbits around the whole Earth once a month. Sometimes the daytime moon is hard to see because it is so near the sun in the sky. Also, consider that if the sun is low in the sky, a slim crescent daytime moon might be straight overhead, so that you would have to crane your neck, looking up, to notice it.

Ordinarily, we do not look up during the day to see such a thin crescent moon. However, as the moon gets farther from the sun in our sky, the portion of its lighted half turned in our direction increases. In other words, the farther the moon is from the sun, the larger the visible phase of the moon … and the easier to see a daytime moon. In this the last week of September 2010, look for the daytime moon in the west after sunrise!