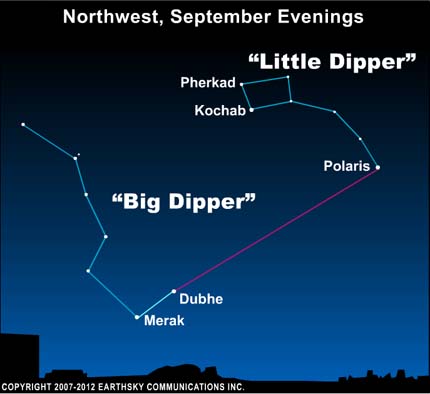 [3]Tonight’s chart shows the Polaris, the Big and Little Dippers for a September evening. Notice that a line from the two outermost stars in the bowl of the Big Dipper point to Polaris, the North Star [4]. Also notice that Polaris marks the tip of the handle of the Little Dipper.

Bright star in east? Might be planet Jupiter, nearly at its closest since 1951. [5]

The constant motion from night to night, of these stars circling Polaris, is a bit like a bear circling its prey, looking for a way to attack. Several ancient cultures from the Greeks and Romans to the Micmac Indians likened these stars to a bear. In Greek myth, the Big Dipper asterism represents the hindquarters and tail of the constellation Ursa Major, the Great Bear. The Micmacs saw the three stars of the Big Dipper handle as hunters chasing the bear.

The northern sky is a large clock, with Polaris at its center. The hour hand is a line drawn through Dubhe and Merak, the two pointer stars of the Big Dipper. Because the stars make a full circle in 23 hours 56 minutes instead of exactly 24 hours, this star clock is not exactly the same as the one on the wall, but with a little practice you can learn to read it well. Watch the Big and Little Dippers circle around Polaris tonight!