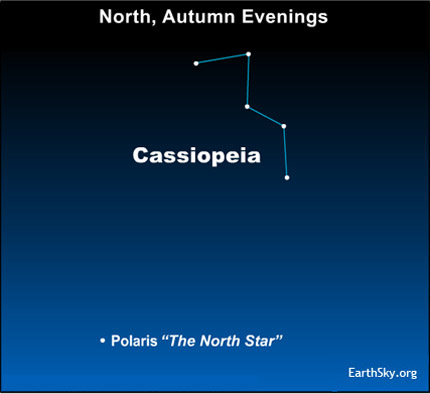 The constellation on today’s chart used to be known among astronomers and skywatchers alike as ‘Cassiopeia’s Chair.’ In the 1930s, the International Astronomical Union [5] gave this constellation an official name of Cassiopeia the Queen.

Cassiopeia was a queen in ancient Greek mythology. According to legend, she boasted she was more beautiful than the sea nymphs, called the Nereids. Her boast angered Poseidon, god of the sea, who sent a sea monster, Cetus, to ravage the kingdom. To pacify the monster, Cassiopeia’s daughter, Princess Andromeda, was left tied to a rock by the sea. Cetus was about to devour her when Perseus the Hero looked down upon her from Pegasus, the Flying Horse. Perseus rescued the Princess, and all lived happily.

The gods were so pleased, that all of these characters were elevated to the heavens as stars. Only Cassiopeia suffered an indignity – her vanity caused her to be bound to a chair and placed in the heavens so that, as she revolves around the north celestial pole, she is sometimes in an upside-down position. That is Queen Cassiopeia, Lady of the Chair, high in the northeast sky on autumn evenings