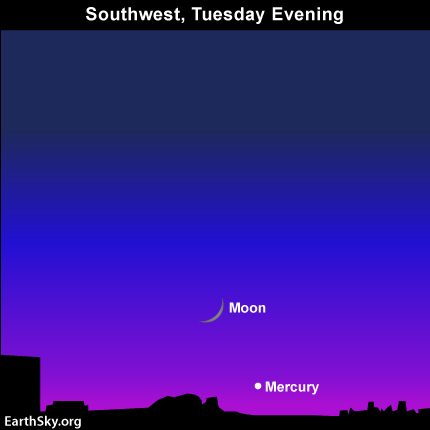 [2]Can you find the slim waxing crescent moon [3] and planet Mercury after sunset this evening? It will be a major sky-watching challenge. Binoculars can help you search, although both worlds are actually visible to the unaided eye in a clear sky shortly after sunset.

To see the planets, find a level horizon in the direction of sunset. The moon and Mercury will pop out close to the southwest horizon some 35 to 60 minutes after the sun goes down. If you look for these two worlds too early, they will still be obscured in the twilight glare. However, if you wait too long, they will have set beneath the horizon before you have time to spot them.

The last new moon [5] was Sunday, December 5. There is a new moon once each month, as the moon in its orbit swings more or less between our Earth and sun. At new moon, the moon’s dark side – or night side – faces Earth. In addition, the moon crosses the sky with the sun during the day. Therefore, we do not see the moon on the day that it is new (unless it’s an eclipse day, with the moon covering the sun).

Today, two days after new moon, the moon has moved on in its orbit. Its now just to one side of the sun as seen from Earth – above the sunset just after the sun goes down. A small sliver of the moon’s day side is now facing our way after sunset. Astronomers call this a young moon [6]. To view a moon as young as tonight’s moon is no small feat!

When can you see earthshine on a crescent moon? [7]

The above chart is for mid-northern North American latitudes, by the way. In the world’s eastern hemisphere – Europe, Africa, Asia, Australia, New Zealand – the lunar crescent appears closer to Mercury. In that part of the globe, you have a good chance of seeing both worlds in a single binocular field.