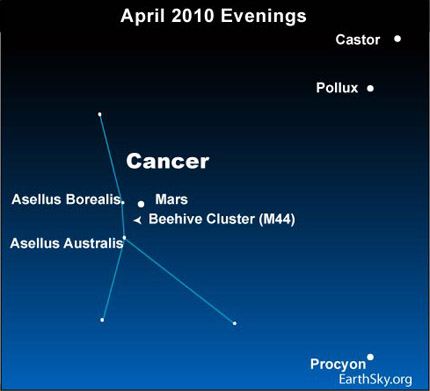 [3]These mid-April evenings provide you with a golden opportunity to see the Beehive star cluster, the crown jewel of the constellation Cancer the Crab. The moon will be absent from the sky for the next several evenings, featuring dark nights for observing this deep-sky treasure.

The Beehive is faintly visible to the unaided eye in a dark country sky. However, you really need binoculars to transform this hazy smudge of light into the sparkling swarm of stars that the Beehive truly is.

To find the Beehive, first locate the planet Mars. It is that respectably bright orange-colored “star” shining high in your southern sky at nightfall. Aim binoculars at Mars to see this cobweb of stars close to the red planet, easily within the same binocular field. What is more, Mars and the Beehive stage themselves inside a single binocular field until almost the end of April. They come closest together on April 16.

The Beehive has become a casualty of light pollution. In ancient times, this cluster was called the “Little Cloud” and once served as a celestial weather station. The Roman author Pliny reports that the absence of the “Little Cloud” from an otherwise clear sky indicated impending storm.