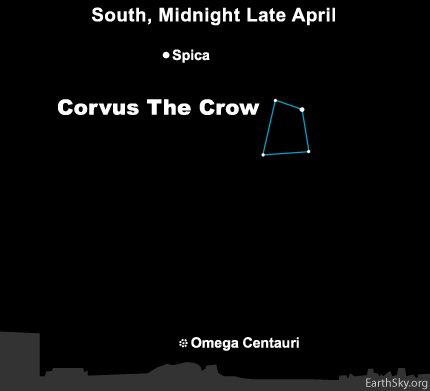 [3]Silvery-blue Spica, the only prominent star in the constellation Virgo, acts as your guide to the Omega Centauri globular star cluster. To the unaided eye, Omega Centauri looks like a fairly faint (and possibly fuzzy) star. Very few of the Milky Way galaxy’s 250 or so globular clusters [4] are readily visible without optics.

To find Spica, extend the curve of the Big Dipper handle, as illustrated on our April 4 [5] EarthSky Tonight. Spica transits – climbs to its highest point in the sky – around midnight tonight. Spica’s precise transit time for your sky is available at the US Naval Observatory [6]. Spica – like any star – transits 4 minutes earlier with each passing night.

As seen from mid-northern latitudes, Spica and Omega Centauri transit due south in concert. Look for Omega Centauri about 35 degrees directly below Spica. (A fist at an arm-length approximates 10 degrees.)

People living south of 35 degrees north latitude have a realistic chance of spotting Omega Centauri, though it’s been seen as far north as Point Pelee, Canada (42 degrees north). Best appreciated with a telescope, Omega Centauri [7], the largest and brightest of all globular star clusters, is a globe-shaped stellar city, teeming with millions of stars!