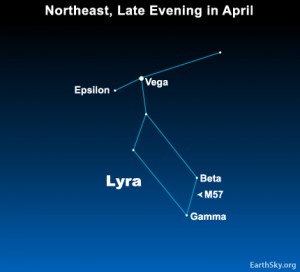 [3]Here is the constellation Lyra again – a closer look than on Tuesday [4]. This constellation rises over your north-northeastern horizon around 10 to 11 p.m. tonight and marks the radiant point of the Lyrid meteor shower. The Lyrids were predicted to put forth the most meteors before dawn this morning. However, meteor showers are hard to pin down, so you may see as many or more meteors in the wee hours before dawn tomorrow. You never know for sure what a meteor shower has to offer, unless you look. Be sure to find the darkest possible sky, away from city light. The hours between midnight and dawn are usually best.

If you are standing out there looking tonight, try checking out some of the stars in Lyra. This tiny but prominent constellation represents a lyre, an ancient musical instrument that is essentially a small harp. The constellation is dominated by the brilliant star Vega. Vega [5] is sometimes called the “Harp Star.” The constellation Lyra is easy to see because it is small and compact. Many people see it as a little triangle set on top of an oblique parallelogram.

In Greek mythology, Lyra represents the lyre or harp of the musician Orpheus. It was said that when Orpheus played this instrument, neither mortal nor god could turn away.

There are several other interesting sights for small telescopes within the constellation Lyra. One is the star Epsilon, just to the lower left of Vega on our chart. This is the famed double-double star, which means that in binoculars it appears as a double star, but each of those stars also appears as a double in a telescope. In other words, the single point we see with the eye as Epsilon [6] is at least four stars.

Another interesting object is M57, the Ring Nebula, located between the Beta and Gamma stars of Lyra. These are the two stars farthest from Vega, and to the lower right on the chart. M57 is roughly halfway between them, and appears as a faint ellipse – like a smoke ring – in a telescope. It is a planetary nebula, the remnant of a sun-like star that shed its outer layers and died.