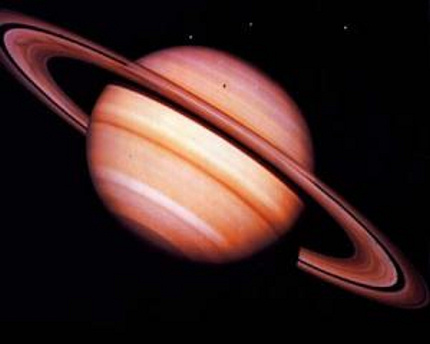 [3]It is a big and bright waxing gibbous moon [4] that you will find beaming for most the night tonight.

That is a moon that is more than half lighted but less than full. Full moon will come on April 28. In the northern hemisphere, people have called the April full moon by many names but with a common theme – Planter’s Moon, Seed Moon, Flower Moon, Growing Moon, Awakening Moon.

Between now and April 28, you’ll see the moon nearly all night, looking close to or completely full. Tonight, you can use the moon to find a planet – Saturn, the sixth world outward in orbit around our sun. Saturn will look like a golden “star” near tonight’s moon. Saturn is in front of the constellation Virgo the Maiden now and will be until July of 2010.

The moon moves around Earth once each month. However, the cycles of the planets in our solar system typically take longer. Earth passed between Saturn and the sun about a month ago. Then Earth and Saturn were relatively close together in space, and Saturn was at its brightest and up all night. In September, when Earth has gone halfway around the, our vantage point on Saturn will have shifted so much that it’ll pass behind the sun as seen from Earth.

Sometime in September, we will see Saturn disappear in the sunset glare. Therefore, Saturn and Earth were closest for the year last month. Now Saturn does not look as bright in our sky as it did in late March because Earth is moving ahead of Saturn in our smaller faster orbit around the sun.

You can distinguish Saturn from Spica and Regulus, because Saturn shines with a steadier light than these standout stars. In addition, Saturn has a distinctive golden color, whereas Spica and Regulus both sparkle blue-white. If you have a hard time seeing color with the eye alone, by all means use binoculars to see these orbs in living color. Therefore, that is tonight, the moon and Saturn from nightfall until shortly before dawn. In a day or two, look for the nearly full moon to pair up with Spica, Virgo’s brightest star.