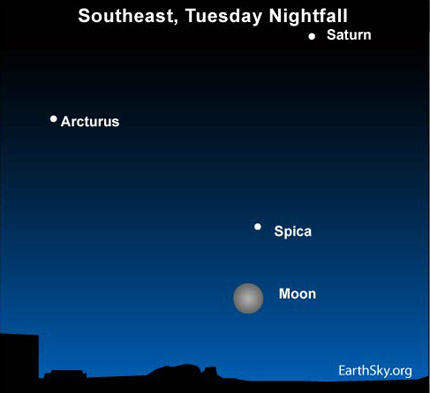 [3]Astronomically speaking, the moon turns full tomorrow – on Wednesday, April 28 – at precisely 12:18 Universal Time [4] (7:18 a.m. Central Time). An astronomical full moon [5] occurs at that fleeting instant when the moon stands most directly opposite the sun in Earth’s sky. For general reference, however, we can say that the full moon shines from dusk until dawn tonight.

The moon shines near three brilliant points of light this evening. A short hop above the moon takes you to Spica [7], the brightest star in the constellation Virgo. Go past Spica to the next bright star-like object, which is Saturn, the sixth planet outward from the sun. Last, but not least, fly to the upper left of the moon and Spica to land on the star Arcturus [8], the brightest of these celestial gems.

Tomorrow, the moon will pass out of the constellation Virgo. Nonetheless, you can always use the Big Dipper to locate Arcturus and Spica [9]. You can also find Saturn, because this world makes a triangle with Arcturus and Spica throughout 2010.