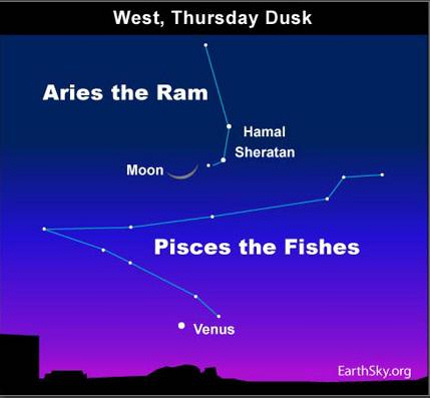 Given clear skies, there is no way that you can miss the planet Venus right below the moon. Venus beams as the brightest celestial point of light in the early evening sky. (Keep in mind, though, that Venus sets about 1.5 hours after sunset.) At present, Venus sits in front of the constellation Pisces and will continue to do so till nearly the end of the month. By April, Venus will have passed into the constellation Aries.

Aries is the Ram constellation, and some see the Ram’s horns here. Aries has very few showy stars and is one of the smallest constellations in the skies. Will you see it? Maybe. You might at least see Hamal, otherwise known as Alpha Arietis, the brightest star in Aries.

One of the ancient myths related to Aries is that a ram would lead Bacchus and his entourage to water after they were wandering in the Liberian desert for a while. As a reward, Bacchus set the ram under the stars. Therefore, according to this ancient myth, when the sun wanders through Aries, it turns things green and starts to flower on Earth, .