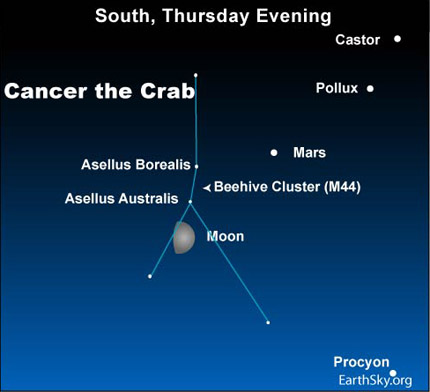 If you observed the moon last night [3], you know that the planet Mars appeared to the upper left of the moon. This evening, you will find Mars as a bright orangish “star” to the upper right of the moon. You will need a medium sized telescope and good seeing conditions to see much on Mars, but a small telescope or even a good pair of binoculars will show you many features on the moon. The large dark spots are lava plains or maria, while a few smaller bright spots are relatively new “rayed” craters. You may also see some darker, non-”rayed” craters. The dark maria visible tonight forms what some describe as a “frog,” and others a “poodle dog.”

Tonight’s moon shines below two faint stars in the constellation Cancer: Asellus Australis (the Southern Donkey) and Asellus Borealis (the Northern Donkey). Sandwiched between these two stars is the crown jewel of Cancer: the Beehive star cluster. However, the moonlit glare will probably wipe these faint stars and the Beehive from the slate of night tonight. On a dark, moonless night, binoculars show the Beehive’s faint, smudgy patch of light to be a shimmering nest of stars.

The ancients could see this little star cloud – as we can today with the unaided eye on a clear, dark night. They called it the “Manger” or in Latin, Praesepe. It is also called M44, being the 44th in a list of objects compiled by French Comet hunter Charles Messier. Comets often look like fuzzy faint glows, so Messier wanted to catalog all objects like the Beehive so he would not confuse them with comets in the future.

Note that an imaginary line drawn from Pollux through Mars points to M44, so you can come back on some moonless evening to locate the Beehive and to enjoy it in all its glory. Starting in early April, Mars and the Beehive will occupy a single binocular field of view for about 3 weeks. Mars and this glorious cluster will be closest together and most impressive on moonless mid-April evenings.

The Beehive cluster might contain as many as 1000 stars, although you won’t see near that many in binoculars or a telescope. The Beehive is roughly 600 light years from Earth, and only about 700 million years old. The entire cluster spans a width more than 3 times the apparent width of the moon. So, even if you can’t see it, go out tonight and use the moon and Mars to locate the Beehive!