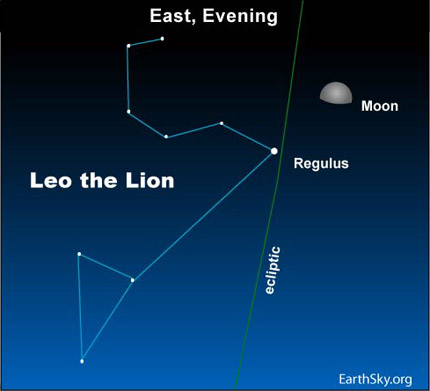 Can you find the star that is shining close to the big and bright waxing gibbous moon [3] tonight? That is Regulus, the brightest star in the constellation Leo the Lion. Regulus [4] is the only first-magnitude star to sit almost exactly on the ecliptic.

The ecliptic is the Earth’s orbital plane projected outward onto the sphere of stars. The ecliptic is often shown on sky charts, because the moon and planets are always found on or near the ecliptic.

Before 1959, the most recent planet/first-magnitude star occultation took place on November 10, 1783, when Venus occulted Spica. Venus will again occult Spica on September 2, 2197.