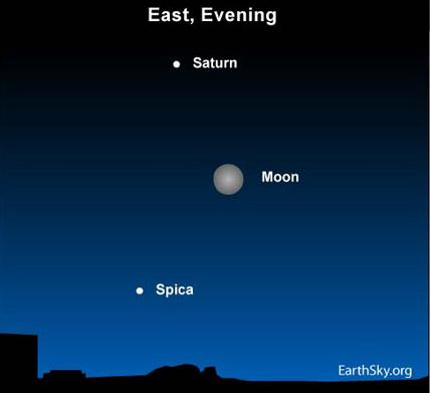 Tonight, the full moon [3] beams between the golden planet Saturn and sparkling blue-white Spica, the brightest star in the constellation Virgo the Maiden. For the northern hemisphere, this is the first full moon of spring – or the first to follow the March 20 spring equinox [4]. The first springtime moon is commonly called the Egg Moon, Grass Moon or Easter Moon. The moon turns precisely full tonight at 9:25 p.m. Central Daylight Time [5].

In the northern hemisphere, the first full moon of spring always takes place in front of the constellation Virgo. Moreover, the constellation Virgo is first seen at nightfall in early spring. Virgo will continue to come out as darkness falls all through spring and summer. However, by the time the leaves turn color and start to fall, Virgo will disappear from the evening sky – not to appear at nightfall again until the following spring. No wonder people in the northern hemisphere associate Virgo with the goddess of fruitfulness!

You probably will not see much of Virgo except for Spica. However, the early Greek stargazers saw these stars as Demeter, their goddess of fruitfulness. It was said that the god of the underworld, Hades, fell in love with Demeter’s daughter, Persephone. But Demeter didn’t approve and refused to allow them to marry. Eventually, Hades’ passions got the best of him. He swept Persephone away in his black chariot and took her to the underworld to live.

Demeter is said to have roamed the Earth searching for her daughter, neglecting her duties as Earth goddess. Seeds didn’t sprout, trees didn’t bear fruit, and a famine hung over the land. Finally, the king of the gods, Zeus, forced Hades to let Persephone go. Zeus had warned Persephone not to eat anything while in the underworld, but she, overcome with hunger, had eaten six pomegranate seeds. As a result, she could not return to her mother permanently. She would have to spend six months with her husband and then six months with her mother each year.

According to the legend, when Persephone is spending her six months in the underworld, the Earth goddess Demeter grieves, and we have fall and winter. Then when Persephone comes back to Mount Olympus, spring arrives!

Modern astronomers have found Virgo to be fruitful in other ways, too. Virgo marks the direction to a massive cluster of galaxies [6] that is about 60 million light-years [7] away. Our own Milky Way galaxy belongs to what is called the Local Group of galaxies, and the Local Group, in turn, is thought to be a far-flung member of this Virgo galaxy cluster.