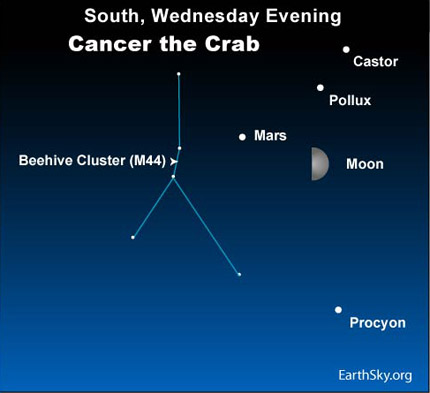 If you have been tracking the moon over the past few evenings, you know that it has been passing through some of the major players in the late winter, early spring skies. It skimmed the Pleiades star cluster on Saturday, then it plodded through Taurus the Bull, across Gemini the Twins and after midnight tonight it slips into Cancer the Crab. However, unlike Taurus and Gemini, Cancer is a very faint constellation, often not visible at all from urban locations. It has not a single star brighter than magnitude 3.5 (oddly, the brightest star in this constellation is the Beta star rather than the Alpha star!). On the other hand, it has one of the finest star clusters visible, the famous M44 or Beehive cluster, also known as Praesepe (Latin for “Manger”). More on this tomorrow [3].

If you go out tonight and observe the waxing gibbous moon [4], you may think, “Whoa, there is a bright star in Cancer!” But that bright “star” above and to the left of the moon is not a star at all, but the planet Mars. Of course Mars is not a permanent resident in Cancer, but when it comes to visit, which it does every couple of years, it usually hangs around for at least several weeks. This year, due to its recently completed retrograde cycle, it has been in the vicinity of Cancer since the beginning of the year.

In fact, from time to time all the planets move through Cancer, as do the sun and moon. This is because the ecliptic, which is the apparent path of the sun and roughly the path of the moon and all the bright planets, passes directly through Cancer. Tonight, the moon and Mars meet in the Crab, although of course this is a “line of sight” illusion. They are not close at all. The moon is about a quarter of a million miles away, whereas right now Mars is about 88 million miles away.

You might be interested to know that Mars will hang around in Cancer a while longer, and in fact the moon will pass by again on April 21. Mars drifts away into Leo in May, to be replaced in Cancer by much brighter Venus a month later. When Mars has left Cancer, it will not return until late 2011.