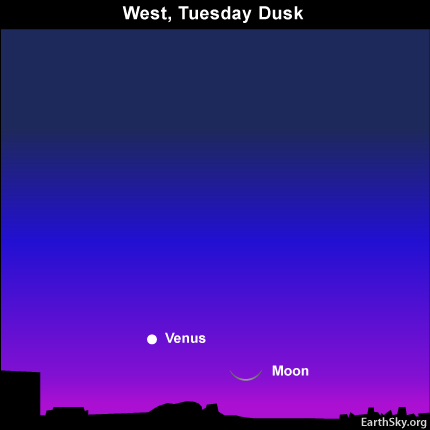 It is nearly spring in the northern hemisphere. The March equinox [3]– when the sun crosses the celestial equator from south to north – will fall on March 20.

This time of year – near the spring equinox – is the most favorable for spotting a young moon [4]. See if you can catch one today after sunset by the blazing planet Venus. A young moon is a thin waxing crescent moon [5] visible in the west in evening twilight. The thinnest moons of the year are typically seen in spring. New moon [6] was yesterday; that is when the moon was most directly between the Earth and sun. So tonight is your chance to see a very young moon low in the west, shortly after sunset. To catch a lunar crescent that is only one day past new moon is no small accomplishment!

However, do not tarry when looking for the moon and Venus. At mid-northern latitudes, the shining couple will follow the sun beneath the horizon a little over one hour after the sun sets today. Find an unobstructed horizon in the direction of sunset. Your window of opportunity for finding the moon and Venus above the horizon is about 30 to 60 minutes after sunset. Binoculars help immeasurably for your young moon and Venus quest.

Why are young moons so much easier to spot near the spring equinox? The answer is that the ecliptic – or path of the sun, moon and planets – stands nearly straight up with respect to the horizon on these near-spring evenings. Contrast the moon’s location tonight and again tomorrow night. From night to night, notice that the moon is moving almost straight up relative to the western horizon. Near the autumn equinox, that is not happening. After sunset at that time of the year, the ecliptic lies at an angle that is very slanted with respect to the horizon. Therefore, the moon’s path from the sunset from one day to the next is nearly sideways along the horizon, and the moon stays buried in horizon haze or hidden behind buildings.

So, enjoy the young moon! It is a sign that warm weather is coming for us in the northern hemisphere.

What is the youngest moon you can see? [4]