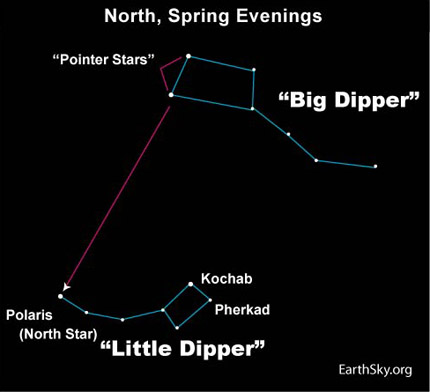 If you draw an imaginary line between the two outer stars in the bowl of the Big Dipper – and extend that line northward on the sky’s dome – you’ll come to Polaris, the North Star. Polaris marks the end of the handle of the Little Dipper, which is fainter and looks less like a dipper than the Big Dipper.

Polaris is special because Earth’s northern axis nearly points to it. Polaris is less than a degree away from true north on the sky’s dome now. It will be closest to true north — less than half a degree away — in the year 2102. The change is due to a motion of Earth called “precession,” which causes Earth’s axis to trace out a circle among the stars every 26,000 years.

Kochab and Pherkab served as twin pole stars from about 1500 BC to about 500 BC. They are still sometimes called the Guardians of the Pole. Kochab is located about 126 light-years away. Pherkad is more distant, at about 480 light-years, by some estimates. Polaris is a bit more than 400 light-years away.