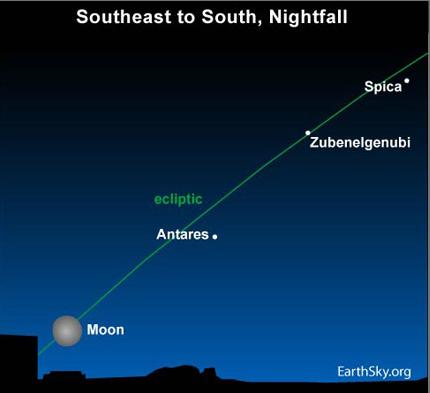 [3]It is early evening, and our chart covers a much larger section of sky than we usually display. We are showing the sky’s southeast quadrant – from east-southeast (where the moon lies) to south-southwest (where the star Spica resides).

As seen from mid-northern latitudes, this evening’s line-up of lights – the moon, the stars Antares, Zubenelgenubi and Spica – arcs rather low across the southern sky. The farther north you live, the lower this arc of lights. The farther south you live, the higher. In fact, if you are as far south as Australia, you will see this celestial line-up swinging high in your northern sky.

The ecliptic passes through the constellations of the Zodiac, as illustrated on our June 12 [7] chart.

Partial eclipse of the moon [8]