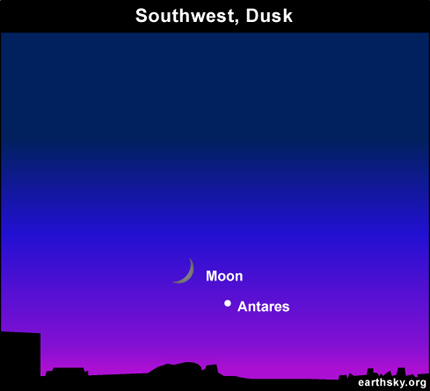 The bright star near the moon on October 11 is Antares [5], Heart of the Scorpion in the constellation Scorpius. It is a red star, but you might not see its reddish color against the fading colors of twilight. Our chart shows the moon and Antares shortly after sunset, when they are low in the southwest. They will set not far behind the sun.

North American viewers will see Antares to the west (right) of the waxing crescent moon [6] this evening. In Asia, Antares is found to the east (left) of the moon. In Europe, Antares appears pretty much under the moon.

Bright star in the east on October evenings? It is the planet Jupiter [7] 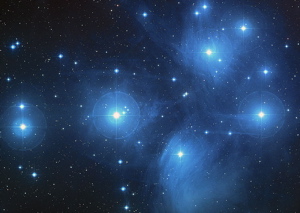 [8]As the moon and the star Antares set in your southwestern sky this evening, turn in the opposite direction, and look for the Pleaides star cluster – also known as the Seven Sisters. The Pleaides will rise in your northeastern sky.

With the eye alone, you can easily spot the Pleaides in the northeast in early evening. It looks like a tiny misty dipper of stars. The image at right shows the Pleiades star cluster as seen through a telescope.

One thing remains constant, no matter where you live worldwide. Whenever Antares sets in your southwest sky, the Pleiades star cluster [9] in the constellation Taurus the Bull rises into your northeast sky. Another thing remains constant as well. Antares sets 4 minutes earlier every day while the Pleiades star cluster rises 4 minutes earlier daily.