As the wind blew and the snow fell outside of Butler-Hancock Hall on the campus of the University of Northern Colorado in Greeley, the Berthoud High girls basketball team was inside battling the number-one seeded Eaton Reds in semifinals of the 3A Patriot League district tournament. The Lady Spartans wound up losing the game by a score of 53-34. With the loss, Berthoud will face off against Valley for third place in the district tourney back at UNC on Friday afternoon at 4:30 p.m. 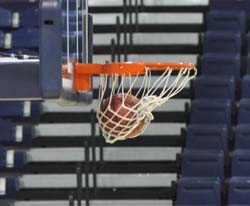 [1]
Berthoud did not have enough of these

Eaton finished the regular season in first place in the 3A Patriot League with a 17-2 record. Coming into their semifinal contest with the Spartans, the Reds had won 14 consecutive games including an 81-33 thumping of Strasburg on Tuesday evening. Two Eaton players – seniors Beth Cheney and Jordan Needens – combined for 37 points, enough to out-score the entire Berthoud team. The Lady Spartans had reason to be confident entering the game thanks to their 13-7 regular season record and thrilling 47-44 victory over Brush on Tuesday.

The Lady Spartans played well at times on Thursday evening but Eaton’s strong play from start to finish was simply too much for Berthoud to overcome. “At times we did things well and played really good and then at other times it was just really bad,” was how Berthoud Head Coach Randy Earl summed up his team’s performance. Earl added, “We had some runs at them and would start to close the gap but then they’d take off again.” In addition to facing a deep and talented Eaton squad, the Spartans also found themselves battling the sub-par officiating. Berthoud found themselves on the losing end of more than a few controversial calls in Thursday evening’s contest.

Eaton’s dominance was evident from the beginning of the game. The Reds opened the contest with 10-0 run that the Spartans were not able to end until senior point guard Megan McGinn scored for Berthoud with 4:07 remaining in the opening period. The Red’s use of the full-court press frustrated the Spartans from the get-go. Berthoud was unable to establish any rhythm on offense as they were consistently harassed by Eaton, who forced five Spartan turnovers in the first six minutes of the game.

Berthoud was able to answer, in part, the Reds’ opening dominance with a 7-1 scoring run of their own. After McGinn’s bucket, fellow senior Danielle Wikre sank two shots, including one from beyond the arc, as the Lady Spartans went on a 7-1 scoring run. Senior Amy Loberg added another basket for Berthoud in the closing minute of the period to cut Eaton’s lead to 15-9.

The Spartans’ fire went out however when the second period got underway. Eaton’s defense continued to frustrate the Spartans as Berthoud was able to score only once from the floor courtesy of a McGinn jump shot. To their credit, the Spartans did manage to sink five of six free-throws and hold the Reds to only 11 points in the second period. 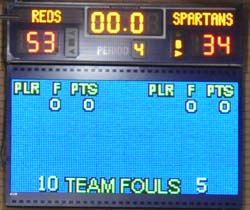 In the second half Berthoud was able to take advantage of Eaton’s proclivity for committing fouls. The Reds committed six team fouls by the 3:10 mark in the third period thus putting them in the penalty and allowing Berthoud at least one free throw attempt for each Eaton foul. The Lady Spartans made good on four of their five free-throw attempts in the period.

Wikre demonstrated her versatility all game long. The senior, who plays both guard and forward, sank a pair of three-pointers, made a layup, converted three of her four throws and snagged three rebounds on the night. “I just came out aggressive and ready to play,” was the succinct description a humble Wikre gave of her performance.

Friday at 4:30pm in Butler-Hancock Hall at UNC the Lady Spartans will play Valley for third place in the 3A Patriot League district tournament. “We just have to play more consistent tomorrow, if we play more consistent we will be okay,” Coach Earl said of Friday’s matchup with Valley. When asked what the team has to do to claim third place Wikre said, “We just have to come out strong, play hard and just be ready because they’re quick.” In their one and only matchup this season the Lady Spartans fell to Valley 53-35 in Gilcrest.

In a consolation round game held Thursday evening at Highland High School in Ault, the Berthoud High boys basketball team lost to Platte Valley 75-56. The loss eliminates the Spartans from the 3A Patriot League district tournament.