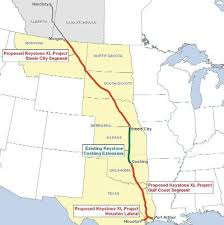 [2] Keystone XL could be a terrorist target.

Keystone XL Won’t Lower Gas Prices, It Might Raise Them

There’s two things we can say about the effect of the Keystone XL pipeline on gas prices. One is that it will, if built, have no effect at all upon gas prices and the other is that it might actually raise them. Which ends up being the final effect depends upon quite what you want to believe about the way the market operates at present.

The standard view is that the absence of the Keystone pipeline makes gas a little cheaper in the mid-West. I’m not quite sure that this is true but as I say it is thestandard view [3]:

In Keystone’s weirdonomics, the pipeline would actually increase prices of gasoline for much of the country, according to at least three studies that have looked into it. Keystone would divert crude from Midwest refineries to Gulf Coast refineries, where it would then be shipped to more expensive markets. Bypassing heartland refineries could drive up prices at home.

For people living in the Midwest, Great Plains and Rocky Mountains, it could add 20 cents a gallon to the price at the pump.

The assumption underlying this is that there is indeed a discount on crude delivered to the mid-West.

Cory Gardener attacks Senator Udall over the Keystone XL pipeline, but nearly every claim he makes for it’s benefits are false.  (Click on Link below)