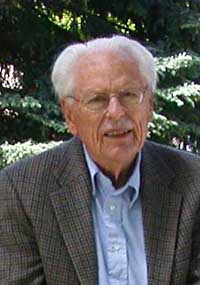 Berthoud lost one of its most beloved residents today when R. Bruce (Doc) Fickel died this morning (March 9) in Longmont United Hospital.

Doc was born to Lee and Lottie Fickel in Edina, Missouri, on March 30 1912. According to Doc, the Fickel’s were minority Protestant Republicans in a Catholic Democratic town. He remained a staunch Republican his whole life.

He attended the University of Missouri, Columbia for his undergraduate work and received his degree in dentistry from George Washington University, St. Louis.

He came to Berthoud in 1940 and established his dental practice. He married Helen McCarty, the town’s medical doctor on May 2, 1942.

Soon after, Doc was called in to the military and served in WWII as a dentist in the U.S. Third Army commanded by General George S Patton. He served in Europe until the end of hostilities and was reassigned to the Pacific Theater. However, the war in Asia ended before his travel date and he returned to the United States to finish his commitment. After his discharge, he and Helen returned to Berthoud.

The Fickels prospered in Berthoud and are remembered for their many philanthropic activities. They were very generous, living by the credo espoused by Helen Fickel, “The donation of your time and your talents and your money are the way we pay the rent for the time you spend on Earth.”

The Fickel’s endowment to the Community Foundation made possible the yearly grants by the local funds committee. The Fickels also built the community library and they were supporters of Berthoud art and were the major donors for the mural ‘Berthoud’ Roots.”

Doc loved to work with his hands and with equipment. He landscaped the grounds and planted the trees in what is now Fickel Park after the Fickels and their friend Francis Bunyan Nielson purchased the old school grounds. Two of his sculptures (enlarged from his originals) now grace Fickel Park. The park was a favorite project of his and it gave him joy to see people using the park.

He also loved to build houses, completing one just this last year. Farming and raising cattle were also among his passions. Never one to rest on his accomplishments, in his 94th year he bought a ranch in Wyoming and made frequent trips to check on his cattle.

Doc was blessed with good health and excellent memory and could often be seen traveling around town on his electric scooter. Last year he came to the Realities for Children motorcycle rally in Fickel Park and I introduced him to the riders. “Here as a man who was riding Harleys before you were born,” I said. Doc had owned three Harley’s before he moved to Berthoud and the bikers gave him a big hand.

Doc was a member of the First Presbyterian Church of Berthoud and served on the planning committee for the present church building. He was also a Mason, as was his father.

He was my friend and we use to have wonderful talks. I know more about him than I know about my own father. Goodbye Doc, I’ll miss you. 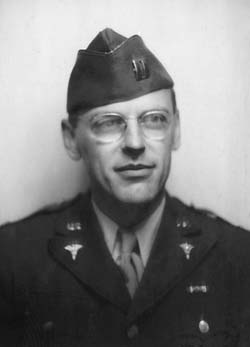 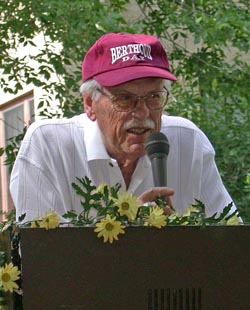 [4]
Doc loved the opportunity to speak 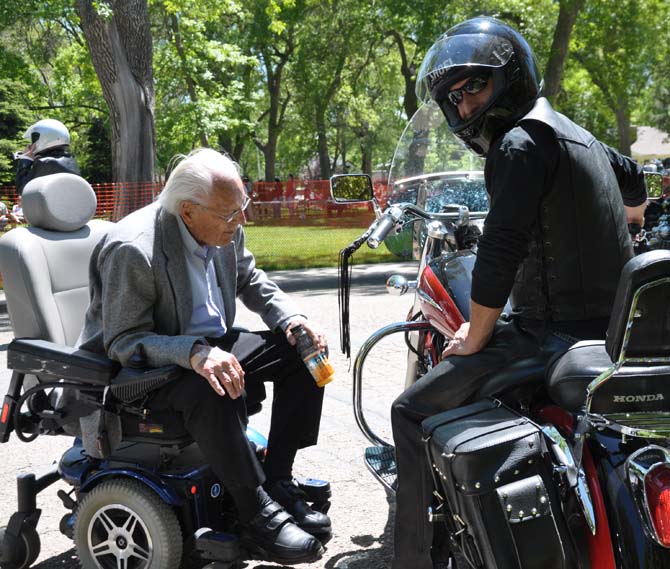 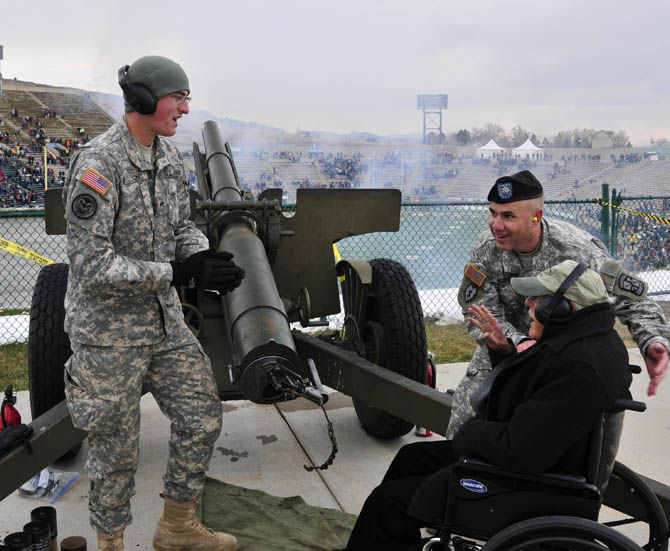 [7]
Doc was asked to fire the CSU canon (Nov 2010). The French 75 is what he trained on as a ROTC cadet at Fort Leonard Wood, Missouri