Over 50 people showed up at All Saints Episcopal Church on Saturday to listen to former Colorado State legislator, Ken Gordon speak about money in politics. The event was sponsored by the League of Women voters of Larimer County.

Gordon’s main point was that if a candidate takes money from special interest groups, then they are beholden to those interests and voters have less say in government than donors with money. 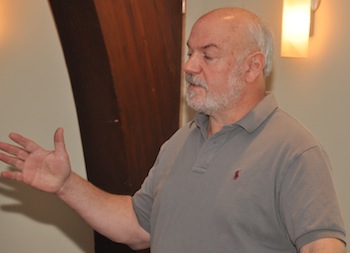 [1]Gordon used his own experience to illustrate. When he decided to run for the Colorado House in 1992, he made a decision to not accept special interest money so that he could speak for the voters. His campaign resonated with the voters, and he raised as much money from small donors as his competitors did from their special interests. In 1992He was the only candidate who did not take money from special interests and he won the election.

Gordon said, “We are losing our democracy for money.” He has been working to convince candidates that they can and should run for office without accepting the money. CleanSlateNow’s web site lists candidates across the country who have pledged not to accept special interest money. Here are those in Colorado.

Several members questioned Gordon about “Citizens United” and SuperPacs. Gordon said that the Citizens United decision undid progress going back to Theodore Roosevelt. He offered that it needed to be overturned, but that would probably be a long process and that the goals of CleanSlateNow will bring more immediate results.

He also said that SuperPacs might run ads supporting someone on CleanSlateNow’s list, but as long as the candidate pledges not to accept special interest money, they will continue to be listed.

One of the last questions asked whether CleanSlateNow needed donors. Gordon smiled as he answered in the affirmative. The organization needs donations to pay the small number of staff and volunteers to work on door to door campaigns.

You can visit CleanSlateNow.org [8] to make donations or volunteer your time or your attendance at special events.