Inside the Mind of James Clapper [2] 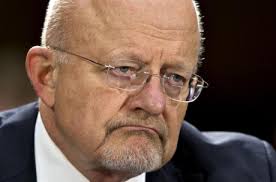 I’m going to have a story published later today about a new document, but until then, this new interview with [5] (and profile of) Director of National Intelligence James Clapper by the Daily Beast‘s Eli Lake is worth spending a few moments examining. Last week, Lake published one excerpt of his interview [6] where Clapper admitted that the U.S. Government should have told the American people that the NSA was collecting their communications records: as pure a vindication of Edward Snowden’s choice as it gets, for obvious reasons. But there are several new, noteworthy revelations from this morning’s article:

Thanks to rogue contractor Edward Snowden, the machinations of the shadow bureaucracy Clapper heads have for the last eight months been exposed one news story at a time. Clapper is often the guy who has to call newspaper editors to tell them not to print stories that they usually publish anyway.

This process of pre-publication notice to the government of NSA stories has been wildly misreported in some places. I’ve long expressed contempt for this process where it results in the suppression of information that should be public [7]; where it essentially elevates U.S. officials into publication partners [8] by engaging in protracted “negotiations” with them over what can and cannot be published; and especially where it means news organizations knowingly allow government officials to lie [9] by withholding the actual facts.

For all the NSA stories published over the last eight months all around the world, the U.S. government was notified prior to publication (usually very shortly prior) by the news organizations’ editors (never, to my knowledge, by the journalists, at least not by me). News organizations do this for two reasons.

The first is legal: the U.S. Government insists that the publication of classified information, especially that which relates to “communications intelligence”, is a felony (see 18 U.S § 798) [10], so every media lawyer vehemently argues that allowing the government an opportunity to make the case for why something shouldn’t be published is necessary to show a lack of criminal intent, i.e., to avoid criminal prosecution even while publishing top secret documents; the other is journalistic …