LOVELAND, Colo. – The Western Conference-leading Utah Grizzlies improved to 8-2-0 with a 2-1 win over the Colorado Eagles at the Budweiser Events Center on Military Appreciation Night. Andrew Engelage stopped 32 of 33 shots and the Grizzlies’ highly-ranked penalty kill improved statistically by stifling nine of 10 Eagles opportunities. 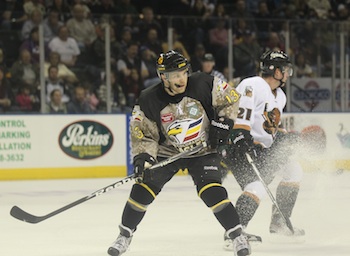 The teams played a fairly even first period with the only goal coming at 7:50 when Andrew Favot put home a Riley Emmerson rebound to give the Grizzlies the game’s first goal. Shots were even at 7-7 until a late power play gave Utah an 11-7 lead at the first intermission.

The Eagles out-shot the Grizzlies 12-11 in the second period, and had several great opportunities to score but couldn’t beat Engelage. Possibly their best chance came just under four minutes into the frame when Chad Costello had the Grizzlies’ goalie down and out of position on a breakaway before the lanky, 6-foot-5-inch, netminder was able to poke-check the puck off Costello’s stick.

Midway through the second period Colorado was awarded a four minute power play due to a blood-drawing high sticking penalty against Paul McIlveen, but again they couldn’t convert. And with time running out on the period, the Eagles were given nearly a minute’s worth of 5-on-3 play only to enter the second intermission still without a goal.

While the Eagles struggled to convert on the power play, Utah made it 2-0 on their fifth and final man-advantage chance of the night at 1:49 of the third period when Jeff LoVecchio deflected a Nick Tuzzolino point shot past Kyle Jones.

Just like in the second period, Colorado was awarded another four minute power play via a high sticking call against Utah midway through the third, but they again failed to capitalize. But finally, at 15:52, Aaron Schneekloth got the Eagles on the board with a power-play goal from the point.

That was, however, as close as Colorado could come to tying the game and the Grizzlies took the first of the teams’ three games in a row; they’ll meet Friday and Saturday night in Utah.