Now, Dennis Hastert Seems an Architect of Dysfunction as Speaker [2]

WASHINGTON — The book jacket for J. Dennis Hastert’s 2004 memoir, “Speaker,” proudly notes how little known he was by the public despite being one of the most powerful people in America.

“Not because he has anything to hide,” it says, “but because he doesn’t care who gets the credit.”

It turns out that John Dennis Hastert did have something to hide, something quite reprehensible. Now his admission in federal court that he sexually molested wrestlers [4] on the Illinois high school team he coached years before setting foot on Capitol Hill is provoking a re-evaluation of his tenure as the longest-serving Republican speaker. And Mr. Hastert fares poorly in this new light.

The bill of particulars is lengthy. Consider the Mark Foley page scandal. An explosion in questionable “earmarking” for pet legislative projects. The neutering of an already weak ethics process. Hardball tactics on the House floor. A weakening of committee chairmen accompanied by heightened pressure on them to leverage legislative clout to raise campaign money. Undue deference to the executive branch. Personal enrichment.

Take those together with the shocking revelations of sexual abuse of youths placed in the trust of Mr. Hastert, a popular and successful coach, and he emerges as a deeply flawed figure who contributed significantly to the dysfunction that defines Congress today. Even his namesake Hastert rule — the informal standard that no legislation should be brought to a vote without the support of a majority of the majority — has come to be seen as a structural barrier to compromise. 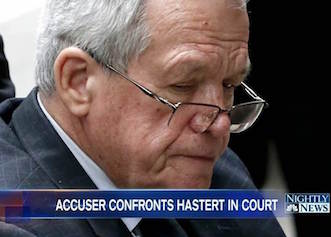 Mr. Hastert’s affable persona and the odd circumstances that thrust him into the speakership — a surprise resignation at a moment of crisis and the lack of alternative consensus candidates — kept expectations low and helped insulate him from harsh criticism.

“Nobody was going to see him as evil incarnate or someone who was fundamentally undermining the integrity of the legislative process,” said Norman J. Ornstein, a congressional scholar at the American Enterprise Institute who has been critical of Mr. Hastert and his era in the House. “But the abuses and the offenses just kept piling up.”

The nature of Mr. Hastert’s sexual conduct with the youths — one of whom took financial compensation that led to law enforcement scrutiny of Mr. Hastert’s banking practices — raises new questions about his handling of the page scandal.

Disclosures of sexually charged communications from Mr. Foley, then a Republican House member from Florida, to teenage pages whose welfare was the responsibility of House leaders caused a furor in 2006 and helped Democrats take back the House. Mr. Hastert professed no awareness of the activities even though others said he had been alerted to the behavior but did nothing.

It is now easy to imagine that Mr. Hastert had hoped the problem would disappear out of fear of bringing attention to his own past. In fact, rumors about Mr. Hastert surfaced at the time but nothing ever came of them until years later, when large bank withdrawals to pay one of his victims caught the attention of federal authorities.