If you have the chance to see the Moon Theatre’s production of the “The Odd Couple” at the Rialto Theater, do! It is delightful.

When veteran director, Don Kraus, was given the opportunity by the Moon Theatre Company to choose a comedy to direct at the Rialto … knowing the actors he has worked with from previous performances … he chose “The Odd Couple” as the best comedy to showcase their talents.

Indeed, Ken Benda as Oscar Madison, and Brien Fletcher as Felix Ungar bring tremendous energy to the laid back Oscar and the intensely precise Felix. No matter which character you may feel the greater empathy for; you will still gain a greater sympathy for the other side.

The supporting cast, the odd couples poker playing buddies, Speed played by Larry Westrum, Rick Padden as Vinnie, Mark Orlowske as Murray and Jon Andrews as Roy all are distinct characters on their own, and leave a memorable impression with the audience. The ladies Gwendolyn and Cecily Pidgeon (Gale McGaha Miller and Kathleen Gruman), silly and compassionate come late into the play and offer resolution for the dilemma.

For those who may be too young to remember the popular television series played by Jack Klugman (Oscar Madison) and Tony Randall (Felix Unger) or the 1968 movie – Jack Lemmon as Felix and Walter Matthau as Oscar – must see this stage comedy that brought them about. It is 100 percent funny. The characters … you will see yourselves and your friends in them. This play is about friendship and compassion. It is about personal differences and how finding a comfortable space to maintain ones individuality is not easy, but is the only solution to preserving the warmth friendship brings to our life. 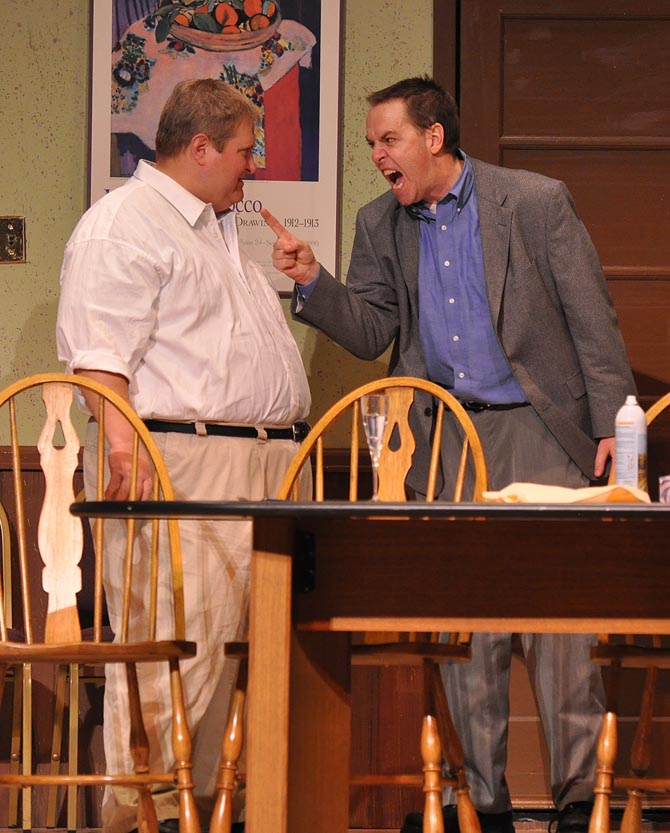