“Healthy Rivers Alternative” better for economy and environment than NISP

Fort Collins, CO — Today, Save the Poudre: Poudre Waterkeeper outlined many of the economic benefits that the “Healthy Rivers Alternative” would provide to northern Colorado cities.  The Healthy Rivers Alternative offers a plan for a water supply alternative for subscribers to the Northern Integrated Supply Project (NISP) that better protects farms, minimizes public debt, and better protects the Cache la Poudre River, all of which will protect and enhance northern Colorado’s economy and environment.

“Save the Poudre agrees that NISP communities may need more water,” said Gary Wockner of Save the Poudre: Poudre Waterkeeper.  “The Healthy Rivers Alternative provides a plan to get that water while protecting the Poudre River and protecting northern Colorado agriculture.  Whatever economic benefits NISP would provide, the Healthy Rivers Alternative would provide all of those benefits and significantly more.”

Save the Poudre points to an undisputed section of the Draft Environmental Impact Statement, page 292, Table 4-2 (below) that shows that in an average year NISP will remove between 46.5% – 71.3% of what water still remains in the Poudre River through Fort Collins and downstream: 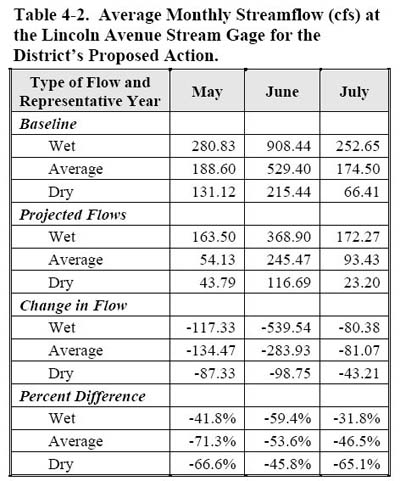 [2]“NISP would drain over half of the water out of the Poudre River through Fort Collins,” said Wockner.  “And that is in addition to the sixty percent of water already drained by current diversions.  If NISP is built, less than 25% of the native flow of the Poudre would still flow through town — NISP would turn the Poudre into a muddy, stinking, polluted ditch.”

Because of NISP’s many negative impacts, the Fort Collins City Council voted unanimously to oppose NISP.  The U.S. Environmental Protection Agency issued a stinging rebuke of NISP including a veto threat.  The State of Colorado Water Quality Control Division issued a scathing critique of NISP and a non-certification threat.  And finally, the Northern Colorado Business Report, the region’s only business newspaper, editorialized:

“There can be no worse economic damage that could be done to this region than to allow environmental quality, especially the health of our rivers, to be degraded.  NISP is a mistake we can’t afford to make.  Let’s begin work on alternatives.”

Save the Poudre’s Healthy Rivers Alternative begins that work

First, the Healthy Rivers Alternative better protects farms.  The recently published technical summary, “The Farm Facts About NISP,” indicated that NISP would likely force the dry-up of tens-of-thousands of acres of irrigated farmland in northern Colorado.  This dry-up could cause up to $104 million worth of negative impacts tothe agricultural economy every year.  Conversely, the Healthy Rivers Alternative relies on water-sharing agreements with farms — called “rotational fallowing” and “Super Ditch” programs — that allow farmers to stay in business.

“The Healthy Rivers Alternative is better for farms and better for the farm economy of northern Colorado,” said Gary Wockner.

Second, the Healthy Rivers Alternative relies on aggressive water conservation programs that can be built into landscaping and new subdivisions.  These programs can be funded incrementally as needed rather than with massive upfront debt.  The report, New House New Paradigm, by Western Resource Advocates outlines how growing Colorado cities could best conserve water to meet future water supply needs.  Current plans for NISP involve very high water use rates and up to $500 million in upfront public debt to pay for the project.

Allows a recreational whitewater park to be built in downtown Fort Collins that would generate up to $745,000/year of economic benefits to the community.  A brand new report, “Fort Collins Whitewater Park Economic Assessment,” shows that protecting the high streamflows in the river will also create significant economic opportunities for the local economy.  Conversely, if NISP is built, the whitewater park will not be viable due to severely reduced flow in the Poudre River in downtown Fort Collins.

Allows the Poudre to be protected and restored as an “economic engine” for Fort Collins with an aggregate estimated value in Fort Collins between $283 million and $425 million.  This report commissioned by the City of Fort Collins shows how powerful a healthy river can be for the local economy:  “Estimating the Economic Benefits of Maintaining Peak Instream Flows in the Poudre River through Fort Collins, Colorado.“

Protects Horsetooth Reservoir as a drinking water source for all current water providers including Fort Collins and Greeley.  Comments submitted in the Draft Environmental Impact Statement (DEIS) process by Fort Collins (page 4, section 3a) and Greeley (page 9) explain why NISP’s proposal to reduce water quality in Horsetooth could cost cities hundreds-of-millions of dollars to upgrade their drinking water purification plants.

Protects the Poudre River floodway channel and floodplain by reducing the spread of floodwaters, and by reducing the potential costs of flooding.  Comments in the DEIS process for Fort Collins (page 5, section 3d) and Greeley (page 13) explain why NISP’s proposal could increase flooding and flood damage through Fort Collins, Windsor, and Greeley.

Protects the value of the natural areas and open space through Fort Collins, Windsor, and Greeley while protecting the cities’ and the private sectors’ economic investment in real estate and development along the river.  The Poudre River corridor is used for fly fishing, swimming and tubing, bird and nature-watching, biking and hiking.  Fort Collins, Windsor, Greeley, Larimer County, and GOCO have spent tens-of-millions of dollars building a bike path and tens-of-millions more protecting open space along and near the river.  Comments in the DEIS process for Fort Collins (page 3, section 2) and Greeley (page 14) explain potential impacts to recreational uses of the Poudre River due to NISP.