The Deficit: Not as Bad as They Want You to Think [2]

If those so-called deficit hawks [3] would stop moralizing long enough to look at the data, they might find something surprising: That data almost entirely undermine their argument.

Yes, the long-run path of spending on federal health programs remains a serious and legitimate source of concern. But the numbers show that our current fiscal deficit is well within control — as have been the deficits of the last five years. 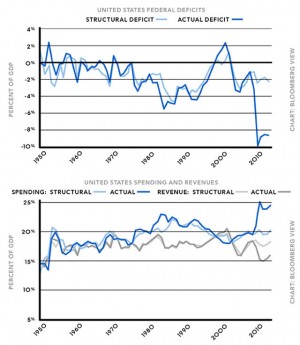 [4]The right way to evaluate the U.S.’s current fiscal condition is not to look at at its budget deficit, which fluctuates sharply due to economic conditions. Rather, it is to calculate the structural budget deficit, the difference between government spending and revenues when the economy is normal. (More technically, it is when the “output gap,” the difference between actual and long-run potential economic output, is zero.)

For this post, I have calculated estimates of the current structural fiscal deficit from 1949 to 2012 with data [5] from the Office of Management and Budget.These estimates come from breaking down the deficit into its components — spending by individual program and revenues from each tax — and computing their sensitivity to the output gap over time through linear regression. My estimates of the output gap come from the Congressional Budget Office.

For fiscal year 2012, the annual structural deficit was $325 billion, or 2.1 percent of GDP. (See the first graph accompanying this post.)

That is worse than no structural deficit at all. But it is hardly unsustainable. The U.S. economy is capable of growing at that pace over thelong run, which means that the ratio of debt to GDP, a key measure of sustainability, will be stable. The weak economy explains the remaining $1 trillion [6] of the deficit, which amounts to 6.5 percent of GDP.

My calculations suggest that federal taxes would bring in revenue of 18.2 percent of GDP, …