Last week we brought you this chart [2], demonstrating that the unemployment rate under President Obama is coming down fairly quickly — though not as quickly as it did under President Reagan in the months before he won a landslide re-election in 1984.

Here’s a major reason why. 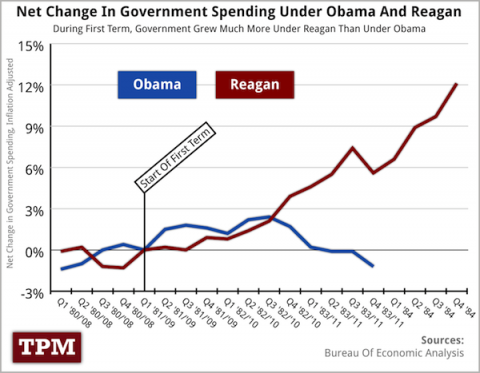 Data from the Bureau of Economic Analysis illustrates a key difference between Reagan’s first term and Obama’s: the pliancy of the Congresses they had to work with. Despite the fact that it was controlled by Democrats, Reagan’s Congress was ultimately accommodative, and the result was significant fiscal expansion, which likely helped bring down the unemployment rate.

Despite presiding over a Democratic Congress, Obama enjoyed no such co-operation. Serial GOP filibusters limited the extent to which he could use deficit spending and temporary tax cuts to hasten economic recovery. Read More [3]