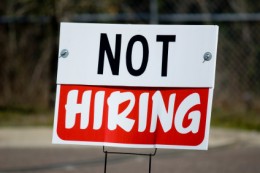 [4]Congressional Republicans have acted shocked and offended [5] at Democrats’ suggestions that they are intentionally sabotaging the economy to try to win back the White House in 2012. Republicans have refused to pass President Obama’s jobs plan — which experts estimate will create at least 1.9 million jobs [6] — and proposed an alternative plan that Moody’s says “will likely push the economy back into recession [7].”

In a rambling letter titled “Call For A Strike of American Small Businesses Against The Movement for Global Socialism,” Brookstone urges businesses [9] “not hire a single person” to protest “this new dictator”:

Resolved that: The current administration and Democrat majority in the Senate, in conjunction with Progressive socialists from all around the country, especially those from Hollywood and the left leaning news media (Indeed, most of the news media.) have worked in unison to advance an anti-business, an anti-free market, and an anti-capitalist (anti-individual rights and property ownership) agenda. […]  Read More [2]