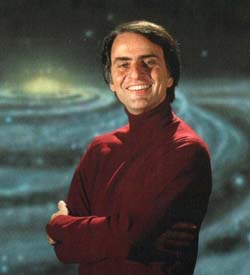 [1]The late Carl Sagan brought the science of the universe to millions of people. He described our existence as being on the shore of the cosmic ocean, where we are  just beginning to learn what lies beyond our present knowledge.

In honor of Sagan’s birthday on November 9, it would have been his 76th, the SETI (Search for Extraterrestrial Intelligence) Institute invited the public to submit essays inspired by Sagan’s imagery. Several essays are available on the SETI website and the winners will be announced on November 9.

You can visit the site and read the essays by clicking on this link SETI/NASA [2].

If you wish to learn more about Carl Sagan and the Cosmos series, visit The Carl Sagan Portal [3] and/or the Center for Inquiry [4] web site.

Wikipedia [5] also has and extensive biography of Sagan.