The answer is a big yes and no. As Mark Twain said, “Figures don’t lie, but liars figure.” It is not exactly a case of “lying,” but rather a case of putting a spin on what the numbers mean. The two articles from Forbes Magazine presented below are excellent examples.

In “ Who Is The Smallest Government Spender Since Eisenhower [2]?”  a May, 2012 article, Rick Ungar makes the case that it is Barack Obama. He includes a graph that shows the annualized growth in federal spending since 1982. It is pretty clear that Republicans have been the party of big government with the largest increases coming from Reagan and Bush II. The smallest increases have been under Democrats Clinton and Obama.

In his September 3, 2012 Oped piece, Michael Strain states, “Yep, Obama’s a Big Spender…Just Like His Predecessors. [3]” He also included graphs. His graphs show spending and deficit as a percentage of Gross Domestic Product (GDP). Both graphs show huge increases by George W. Bush and small declines under Obama, but Strain states “Like his immediate predecessor, he has dramatically increased the size of the federal debt.” It might be just as easy to make the argument that Obama is reducing the cost. One can do a lot in interpreting percentages.

Neither of the Forbes articles took into consideration that GDP and revenues were both low from historical levels. A June article by FactCheck.org – Obama’s Spending: ‘Inferno’ or Not? [5] -provides a more balanced look at the issue of debt and spending and takes the recession into account. The article is pretty well summed up in the statement, “So if current spending is an “inferno,” it’s one that Bush (and Congress) is mostly responsible for starting. But it’s also true that Obama has done little to put it out.”

Obviously, a more robust economy would make all these numbers (percentages) look smaller. More revenue and larger GDP would change these numbers to a much more favorable outlook. It is also obvious that increased income i.e., higher taxes are also going to be necessary to bring the debt down and it is imperative that the national debt be reduced in absolute numbers, not just as a percentage of GDP.

The chart from FactCheck, included here does show, again, that, beginning with Ronald Reagan, the cost of government has historically grown much more under Republican presidents than under Democrats. 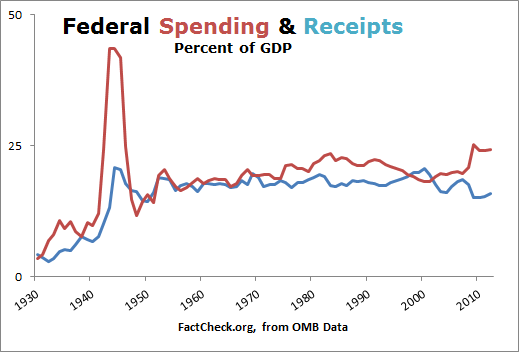 Alan Greenspan noted the following calamity in his 2005 article, Surviving Black Monday [7], in American Heritage Magazine, “Huge government deficits under Reagan had caused the national debt to the public to almost triple, from just over $700 billion at the start of his presidency to more than $2 trillion at the end of fiscal year 1988.” One has to wonder where the outcry was over this, at the time, huge increase in debt. Where was the outcry when Bush I and Bush II increased the debt. While Democrats have been accused of tax and spend, the Republicans have cut taxes and spent even more. Far from being the “smaller government” party, they have been responsible for the most growth in government.

The Economist’s July 25 article “Spot the socialists [9]” makes the case very well pointing out that “ Public sector employment has contracted under Barack Obama, as it did under Ronald Reagan; the real “big government” types were the two Bushes.”

Perhaps it is better to look at what the political parties have done rather than judge them on what they say they are going to do. You be the judge.

If you are not tired of reading yet, you might enjoy CNN Moneys article, “Did Obama really make government bigger? [11] ” Even the conservative Heritage Foundation acknowledges that much of the increase falls on congress.