Dr. Joe Jabaily moved to the region in 1983, and made a lasting impression on northern Colorado that continues on even after his tragic death in 2004.

Neurologist, triathlete and Thompson School District advocate, Jabaily was running for State House District 51 for a second time when he was killed during a charity bicycle race. The local papers called it a tragic loss to the community.

Upon moving to the area, he and his wife Leslie worked tirelessly to promote community involvement and environmental awareness. One major aspect of his legacy is the namesake scholarship that recognizes graduating seniors in the Thompson District committed to improving their communities.

Jabaily’s son Buck, who now lives in Baltimore, Md., said, “The scholarship is fantastic. It’s a great way to honor my father and his legacy.” Applicants write an essay on what and why they are involved in civic-minded projects. “The program just keeps getting better and better,” he said of the award, which is in its fifth year.

“We hope to keep making them bigger and bigger,” he said. “After all, these students deserve some recognition and help that they need. They could be working all that time they are volunteering, but they give of themselves so selflessly.”

“We could all take a page from their book,” Jabaily said.

He added the type of work they are engaged in helps them develop social consciousness and consideration of bigger things outside of their own interests.

“It’s very tempting to be isolated with our televisions and computers,” he said. “It’s great to see young people connect and make people’s lives better.”

And, says Jabaily, the scholarship winners are not just committed to doing one thing or involed in one project, but tend to be wholeheartedly active in many pursuits. “It’s remarkable. They are into causes in many different ways — they’re in 4-H, and other clubs, and they’re track stars — all these projects and causes they’re passionate about.”

Leslie Jabaily, who is an ardent community volunteer herself, is central to the program that was begun in 2004 by friends of the family. She noted, “Berthoud has always been well-represented.” Six students — Kiara Cox, Lee Sullivan, Amber Gomez, Lindsey Morrell, Terisa Thomas, KIra Olson and Melody Condon – have been awarded scholarships. They are unique voices of hope and determination, highly recommended by their peers and teachers, most often described as “compassionate, motivated, determined and altruistic.” And Leslie Jabaily keeps up with them after they graduate.

Showing that their commitment to social causes goes beyond their volunteer time in high school, 2007 awardee Lindsey Morrell, is in her sophomore year at the University of Colorado at Boulder, where she majors in integrated physiology. She was originally recognized for her enthusiastic efforts in Relay for Life cancer campaign and Habitat for Humanity, and continues to be involved in those causes.

Morrell comes from a family with a tradition of helping others. Last summer she traveled with her uncle, who founded an international nonprofit — Room to Read — which builds libraries and schools, and provides scholarships for girls in several developing nations. Once graduated, Morrell wants to pursue a career in medicine.

2005 Berthoud awardee Lee Sullivan spent his college summers in China teaching English, as well as traveling in Great Britain and Ireland, Europe and Southeast Asia. He also scaled the 20K Island Peak, the base camp of Mount Everest. He recently graduated from CU-Boulder with a degree in political science and is headed to Peru.

Other past recipients have gone on to careers in healthcare administration, documentary filmmaking, marine biology and teaching.

Leslie Jabaily enjoys hearing their stories and seeing the fruits of her husband’s efforts to raise the bar on community involvement. “My family and I have been very gratified by the success of this scholarship,” she said. “It has been a very fitting tribute to a remarkable man.”

The award will honor Harbison’s tireless efforts to link medically underserved women to low-cost breast and reproductive health care services. Over the nine years she has been on the Women’s Resource Center staff, she has been an advocate and guide for hundreds of Larimer County women whom she has helped connect to healthcare providers or to funding sources for evaluation and treatment they could not otherwise afford. She also manages breast health funds from the Susan G. Komen for the Cure Foundation to assist low-income women receive mammograms and diagnostics for breast cancer.

Harbison also serves as one of a few Larimer County promatoras, providing health-related outreach and education in a culturally-appropriate way within the Latina community.

Jabaily Community Service Scholarship at a Glance
The JCSS Fund and the Community Foundation of Northern Colorado offer the annual scholarships to graduating seniors in the Thompson School District whose “life activities include political and environmental activism, concern for the civil rights and minorities, support for world peace and respect for the diverse beliefs of others.”
Deadline for applications in February of senior year
Contact Pam Howard at (970) 663-4101, or by e-mail at alpenho@aol.com [1]. 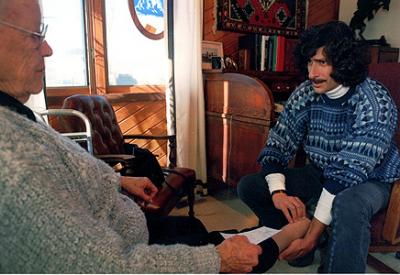 <p>Dr. Joseph Jabaily working with a neurology patient in 2004, just before his death in a local charity bicycle race.</p>

<p>Jabaily with his wife, Leslie, who actively keeps the scholarship program going</p>