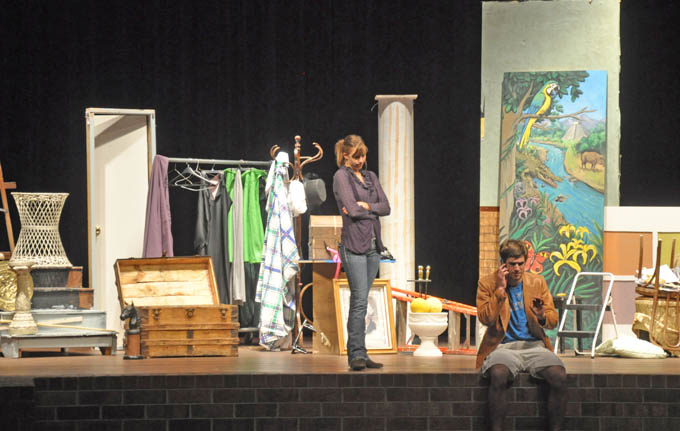 Stage Manager Sonya Ropek is disgusted with the Assistant Director Austin Puckett who does not seem to understand the seriousness of their situation.

No disrespect intended, that is the title of the upcoming Berthoud High School drama production. The play opens as a group of high school actors, who have been abandoned by their drama teacher, have to fend for themselves on opening night in front of an impatient audience. In fact, the teacher has left them hanging because no one had been showing up to rehearsals. Now the students are not quite sure what they are supposed to do. The stage is a hodge-podge of disorganized set pieces with no discernible relationship to each other.

The student assistant director (Austin Puckett) and the stage manager (Sonya Ropek) step in to save the show. They find a box of scripts, which they pass out to the cast and try to throw something together. 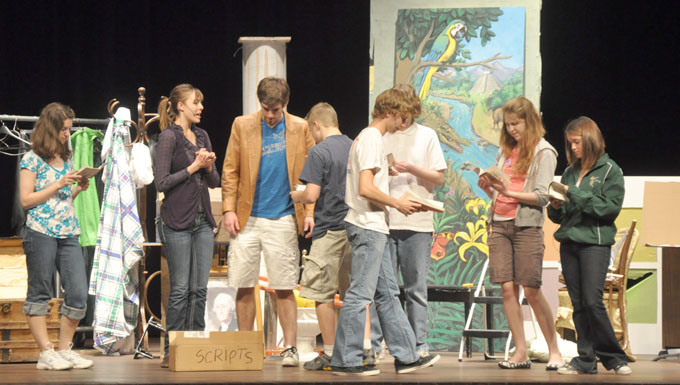 [2]
The cast takes old scripts from previous school plays as the stage manager tell them they have fifteen minutes to get ready.

What follows is a show full of physical comedy, gags and satirical re-writing of plays from Albee to Shakespeare as the actors have to improvise from the scripts, which they only had a few minutes to study.

Scenes such as the “History of Theater: 5,000 Years in 5 Minutes” and “To Be or Not to Be, That is the Digression” give the flavor of where this play is going. You won’t recognize the scenes from “A Christmas Carol” or “Our Town” as the actors present nearly every high school play in five minutes or less.

The opening performance will be on the Stage of the Berthoud High School Auditorium on Wednesday, April 28 at 2:00 p.m. for the student body.  Public performances will be on April 29, 30 and May 1 with show time of 7:30 p.m. The cost of admission is $5 at the door.

The cast members will be playing many roles