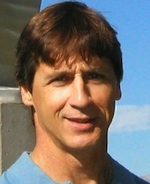 “Nothing ever becomes real, ‘til it is experience.” John Keats

Autumn is hiding beyond tomorrow. Once again, it’s that time of year when the countryside is the place to be – to take in the changing colors, relax and breathe good clean air. Unfortunately, it is also the time of year when some landowners choose to spread toxic sewage sludge across their acreage because it is a cheap alternative to traditional fertilizers.

Since the article, Don’t give me that … biosolid [2]  appeared in the Recorder Online in June an unexpected response occurred. Concerned individuals, including scientists from different parts of the country and Canada, either responded to the Recorder or contacted me directly. I had no idea that the article would have such a far-reaching effect, but it did. What was more surprising was the lack of response from those in our area who are more directly affected by sewage sludge spreading.

For those who may not have had the opportunity to read Don’t give me that… biosolid [2], the following is quoted from that piece.

The nature of news is that it seldom seems real until it is close to home. In this case, it couldn’t be any closer. Sadly, the negative health effects of spreading sewage sludge across agricultural land may not be known for years. Therefore, some are led to believe that there is no risk. “There’s no proof” stated one local landowner, “The effects you brought up in your article might have happened in other parts of the country, but Colorado has good standards and nothings happened here – right?” Wrong.

It is likely that the sewage sludge application that occurred around Berthoud last spring produced some immediate effects. Here are a few examples from a neighborhood near where sludge was spread:

Last April, Wayne, who lives west of Berthoud within a hundred yards of a field where sludge was aggressively applied, visited urgent care four times in two weeks to resolve respiratory problems, Wayne commented he had smelled the foul odor but was not aware of the source. He also stated that he had never experienced such frequent asthmatic complications. Wayne was unaware that sewage sludge was being applied so close to his home.

During that time, Eleanor, an elderly woman living in the same area across the road where sewage sludge was spread, was  taken to the hospital by her son to investigate a lung constriction, which gave rise to concern that she may be suffering from a cardiac event. Eleanor spent four days in the hospital under medical evaluation until her symptoms passed. The doctor determined that her heart was healthy and that there was some unknown issue that affected her breathing. Eleanor returned home. “I couldn’t believe how bad the smell was” she commented, “I usually sit on my front porch to enjoy a cup of coffee each morning, but I couldn’t do that because the air smelled so bad.”  Eleanor’s breathing improved when the sludge applications became less frequent and eventually stopped. She has not had a recurrence since. 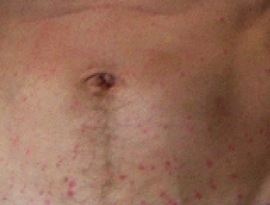 [3]A middle age man, James, also lives near the same field. James experienced a rash over his entire body (see photo) during the time that sludge was being spread. James sought medical analysis and advice from a dermatologist with 30 years experience. The physician’s assistant and dermatologist commented, “It’s weird” and “I don’t know what it is but it will probably pass.” The rash did clear up when the spread of sludge stopped.

Also in this neighborhood, a school bus stop is located at the usual downwind corner of these fields. Every weekday morning children and parents stood next to these fields where tanker trucks were spreading sewage sludge. The health risks from exposure to the potential toxins cannot always be determined in the short term. Again, the effects may not be known for years. From Don’t give me that … biosolid,  “To complicate the process, medical professionals are generally not trained to recognize or identify health complications caused by exposure to the many pollutants found in sewage sludge.”

Depending on one’s location, it might be easy to write off these incidences as coincidence. On the other hand, it is hard to reasonably do so. When there is so much history of health complications from sewage sludge and the likelihood of serious complications it is difficult to turn away from the aforementioned incidences unless you are not directly affected and/or there is something to gain from the practice.

For the sake of all who live close to areas where sewage sludge is spread it’s important to convince the landowners that there are better traditional alternatives which will spare the landowners and their neighbors from the short and long term health effects of sludge application. There is a wealth of information available on-line indicating that sewage sludge spreading is irresponsible and it should stop for the benefit of all.