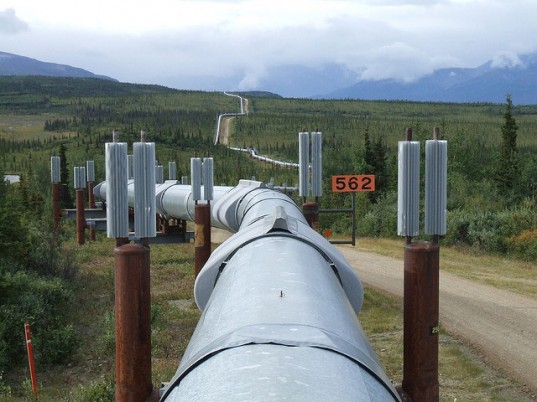 When the State Department released their report on the Keystone XL pipeline last month, news media focused on the report’s conclusion that the pipeline would not significantly worsen carbon pollution. The finding was broadly declared a win [2] for advocates of the project, who are now imploring [3] the White House to approve it.

But buried in the 11-chapter report [4] was a less sunny detail: the Keystone XL would create only 35 permanent jobs [5] after the one or two years of construction jobs dry up.

Republican supporters of the pipeline have long said the project would be a major job creator. In 2012, the U.S. Chamber of Commerce took out [7] a full page ad in the New York Times warning President Obama not to say “no” to “20,000 jobs,” a number taken from the pipeline company’s estimates [8].

When Sen. Johnny Isakson (Ga.-R) said in a speech in 2012 that the pipeline would “employ 20,000 people,” the fact-checking site PolitiFact rated [9] his statement as “false.” PolitiFact noted that even if one were to accept the pipeline company’s job number, each “job” is counted as one “job year.” That means that if the construction project lasted two years, one employee working for two years would be counted as having two “jobs,” …

The oil industry has constantly touted the Keystone XL Pipeline from Canada as a glorious project to increase petroleum supplies for U.S. consumers and provide thousands of jobs for the unemployed, but a new study reveals that the construction of the pipeline would actually cost U.S. consumers dearly at the gas pumps.

On January 4, 2012, Catherine Reheis-Boyd, President of the Western States Petroleum Association, wrote an article on the association’s website extolling the “virtues” of building the Keystone XL pipeline and expanding hydraulic fracking.  (http://www.wspa.org/… [13])

“Take the Keystone XL pipeline, for example,” Reheis Boyd gushed. “We continue to debate and delay a project that would bring more of Canada’s vast oil resource to U.S. consumers, improve our nation’s energy security, and put an estimated 20,000 Americans to work immediately. And while California and other western states won’t directly benefit from the Keystone pipeline, it’s a project with such obvious and urgently needed benefits that it should have been approved and embraced long ago.”

Ironically, Reheis-Boyd wrote this article lobbying for the construction of the Keystone XL Pipeline and increased fracking in the Golden State just four days after controversial “marine protected areas” created under her leadership went into effect in Southern California. (http://yubanet.com/… [14])

Besides serving as President of the Western States Petroleum Association, Reheis-Boyd also wore another hat – she chaired the Marine Life Protection Act (MLPA) Blue Ribbon Task Force that created these alleged “marine protected areas.” These “marine protected areas,” bowing to ocean industrialists like Reheis-Boyd, fail to protect the ocean from oil drilling and spills, fracking, pollution, wind and wave energy projects, military testing and all human impacts on the ocean other than fishing and gathering.

In contrast with Reheis-Boyd’s rosy assessment of the Keystone XL Pipeline, a new report by Consumer Watchdog reveals that pipeline will raise gasoline prices in the United States, hiking prices at the pump 20 to 40 cents per gallon in the Midwest, with no long-term economic benefit to the U.S. economy.

The report finds that:

Drivers, especially in the Midwest, would pay 20 cents to 40 cents more at the pump if the disputed pipeline were built,  …