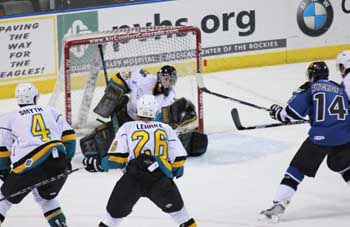 LOVELAND, Colo. – The Rio Grande Valley Killer Bees defeated the Colorado Eagles, 2-0, at the Budweiser Events Center, marking the first time the Eagles were shutout at home in their history (regular season or playoffs). Juliano Pagliero stopped 45 shots — a season high for Rio Grande Valley — and the Bees special teams were the difference, going 8-for-8 on the penalty kill and 2-for-4 on the power play.

The Bees got the only goal they’d need at 7:47 of the first period when they took advantage of a 5-on-3 power play. With 19 seconds left in an abbreviated two-man advantage, Darcy Campbell sent a pass from low in the right circle to Aaron Lee stationed at the left side of the crease for a tap-in past Andrew Penner. The Eagles had their chances to tie the game, but Rio Grande Valley’s top-ranked road penalty kill worked to perfection on Colorado’s two power play chances in the first frame.

The Eagles out-shot the Bees 14-8 in the second period, but couldn’t crack Rio Grande Valley’s penalty kill on three tries. Colorado’s best chance came 6:30 in when Riley Nelson’s shot from the slot rung off the post, but Pagliero stopped everything else sent his way.

Rio Grande Valley notched their second goal at 1:11 of the third, just 18 seconds into their final power play of the night, when Aaron Lewicki’s shot from the left point beat Penner. The closest Colorado got to a goal came at 14:38 when they were able to chip a rebound into the net on their eighth and final power play chance, however, the cage had come off its moorings well prior to the shot.

Pagliero and his teammates continued to stymie the Eagles (despite being out-shot 18-6 in the third), with maybe his best save coming at 17:35 of the final frame when he snared a Kevin Ulanski shot from the right side of the crease as the Eagles employed an extra attacker in a final push to score. That save was the netminder’s 43rd of the game, setting a new season high for both himself and the Bees.

Colorado’s next game will come Tuesday in Independence, Mo. against the Mavericks.