Berthoud plays solidly but falls to Valley in districts 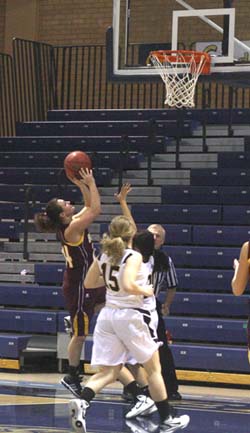 [1]
Danielle Wikre goes for a layup in the 2nd period

It took less than two minutes for the Valley Vikings girls basketball team to make it appear as if they had handily beaten the Berthoud Spartans. The final score in the 3A Patriot League district tournament third place game was 42-35 in favor of third seeded Valley but the seven-point differential does not do justice to how well the Lady Spartans played.

With 1:36 seconds remaining in the game Berthoud trailed by only one point, 36-35. Unfortunately, the wheels came off for Berthoud as the Vikings scored six unanswered points to clinch the victory. “We played extremely well for 30 minutes and 30 seconds and then we threw the ball away twice, we didn’t protect deep in the press and let them pass the ball over our heads for a couple easy lay-ups,” was how Spartan basketball coach Randy Earl spelled out the closing seconds of the game. Valley senior Ashley Ray scored ten of her game-high 15 points in the fourth period and six in the final minute and a half.

Despite the result not being what the Lady Spartans wanted, the players were pleased with the team’s effort against a quality opponent. “It was good to see us finally play to that maximum level of intensity,” said Berthoud senior Julia Perry after the game. Spartan point guard Megan McGinn added, “It was a really good game for us to build off of. Losing is always terrible; the last minute and a half is what killed us but the rest of the game was really good.”

It was good for the Lady Spartans; Berthoud was rebounding from a crushing 53-35 loss to Eaton the night before. Perhaps taking a cue from the Reds, the Vikings made use of the full court press early and often on Friday evening. The Lady Spartans quickly negated any advantage Valley thought they would gain from playing their full-court defense. This stood in stark contrast to the frequent turnovers and sloppy play that was forced upon Berthoud by Eaton’s press in Thursday night’s semifinal matchup.

Berthoud attributed their ability to break the Viking’s press to their hours of hard work in practice. “We didn’t have hardly any turnovers (against the press) and we’ve been working on some stuff. We want the ball to get to Megan and let her clear everyone out and bring it up,” Earl said. McGinn explained, “We practiced (breaking the press) a lot before the tournament … so I felt a lot more prepared this time.” “Every practice we work on breaking the press,” said Perry. 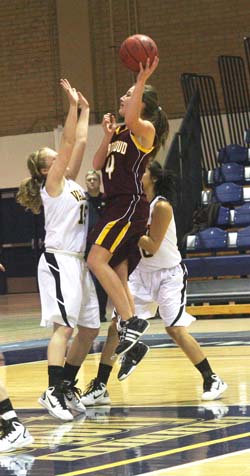 The Spartans took their first lead of the game with 1:15 remaining in the first period on a Perry jump shot. Berthoud closed the quarter trailing by only two points, 12-10. The second quarter was odd as the two teams combined for only six points, two of which were Berthoud’s courtesy of a pair Tanya Bezanson free-throws. The Spartans failed to make a field goal in the second period but were able to hold Valley to only one bucket from the floor. The other two Viking points came from the foul line.

The third period saw the two teams combine for 24 points as Berthoud out-scored Valley 13-11. The Spartans took a 27-25 lead on a McGinn jumper in the final minute the period. Berthoud was able to extend the lead to 30-25 on the opening possession of the fourth period after senior Danielle Wikre drained a three pointer.

In final four minutes of the fourth period, Ray took over the game for Valley. The senior Viking forward nailed back-to-back buckets to tie the score at 30. A three-pointer from Perry and another score from senior Amy Loberg gave the Spartans 35, their final tally. Down by only one point, 36-35, with 1:36 on the clock the Spartans opted to use their full court press but Valley countered it perfectly. On three straight possessions Valley broke the Berthoud press, firing the ball down court to Ray for three easy buckets and a 42-35 win.

Perry, Berthoud’s leader in average points per game for the duration of the season, once again led the Spartans in scoring with 13. McGinn added seven points to go with her two steals; Wikre added five points, two steals and three rebounds.

The Lady Spartans will go week before playing their next game. Berthoud will play next Friday in the regional tournament where, with a win, they will qualify for the state championship tournament.