The Lady Spartans shot 17 of 42 from the floor on the night but converted only five of 13 attempts from the foul line. Berthoud’s 40% field goal percentage was the team’s most efficient shooting performance since December 10 when they blew out Northridge 55-28.

Patience was the name of the game for the Lady Spartans’ offense. The team methodically executed their game plan, waiting on each possession for a player to get open before delivering the ball for a high-percentage shot attempt.

Following the game, Coach Earl said, “We did a great job of running the offense tonight and letting the offense work for us.” Berthoud had a season-high 16 team assists, six of which came courtesy of junior Lindsey Loberg. 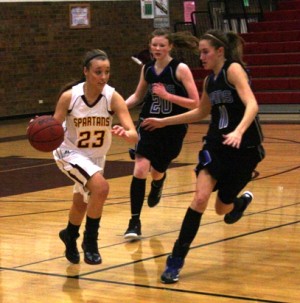 Berthoud took over the game late in the opening quarter, scoring on four consecutive possessions to end the first period with a 10-5 lead. The Lady Spartans raised the stakes in the second period, taking command of the game by shutting-out the visiting Lions 14-0.

Trailing 24-5 at the beginning of the second half, Lyons employed their full-court press in an attempt to cause Berthoud turnovers and convert some quick baskets. The first part of their plan worked, initially, as Lyons’ press forced Spartan turnovers on consecutive possessions.

“We were throwing the ball to people who weren’t open and just making poor decisions…there were people open, we just had to find them,” Coach Earl explained when asked about Lyons’ early second half success with their full-court press.

Berthoud’s defense, however, was simply too relentless to allow Lyons back into the game. Lions scored their first points since the 3:08 mark in the first period when junior Shannon Gillman drained a pair of free-throws with 5:45 remaining in the third period. Lyons was not able to get their first field goal until the 3:34 mark, meaning that Berthoud held their opponent without a bucket from the floor for 16:34 or more than half of the entire game!  Berthoud’s stout defense finished the game with seven team steals and 14 defensive rebounds.

Kouns and junior Hannah Haggas each finished with eight points and a pair of rebounds. Sophomore Kendall Baker led Berthoud with 10 points while Savanna Pague was the Lady Spartans’ leading rebounder with six boards.

The win improves Berthoud to 5-4 on the season and they remain undefeated at 2-0 in the 3A Patriot League.